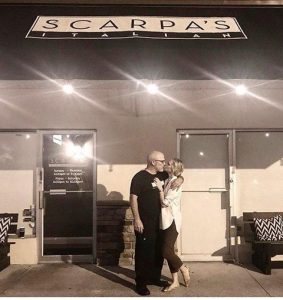 Boca Grande is abuzz with talk of the new restaurant that will tentatively be opening around May 1 in the Old Theatre Building, where PJ’s Seagrille used to be located.

“We are super excited about this, and we hope everyone else is, too,” said Ashley Scarpa, co-owner of the new eatery that will be called Scarpa’s Coastal. “I’ve been coming to the island since I was eight, so that’s 30 years. It’s always been one of my favorite places so this is very special to me. We still come here in June and July to stay at Boca Grande North.”

Ashley will be working front of the house in the restaurant while her husband, Glenn, will be working the back. He is a chef with many years of experience, not only at the couple’s Lakeland location called Scarpa’s Italian but at a restaurant he and his father, Mario, used to own in Lakeland.

“We have been looking for a second location for a long time,” Ashley said. “I had passed my card around to different people years ago, but recently I had even started looking on different islands to see what was available. It’s a great place, but the cost of rent makes the numbers hard for small businesses. So when we heard the Theater Building was vacant I contacted Kathleen (Turner) to see if we could make a deal. She has been so lovely to work with.”

Scarpa’s Coastal will feature a Mediterranean/coastal Italian menu, featuring an approximately 60 percent seafood menu, combined with homemade pastas and craft cocktails. Captains will be welcome to bring their catch in to be cooked.

Ashley said they plan to start making some decor changes and freshening up the place sometime in March. In the meantime, she encourages anyone looking for work in the restaurant business (particularly those who may have worked at PJs) to come and apply for a job. She can be reached at scarpasitalian@gmail.com. Their soft opening is scheduled for, as she says, “May 1-ish.”

“We plan to be open for dinner then,” she said. “During season the plan is to be open for lunch and dinner, and if things work out we would like to stay open year-round. We will have to see how it goes, but we really want to serve the locals as much as we do the seasonal residents – especially during tarpon season.”

Ashley and Glenn are in their sixth season at Scarpa’s Italian in Lakeland, and have received rave reviews. They have been featured on the Food Network, on an episode of Emeril Lagasse’s “Emeril’s Florida” show called “Hidden Gems.” He liked the place so much, he came back on his own time.

“The show was done two years ago,” Ashley said, “but some time after that we got a call from the restaurant telling us he was back. Of course the reservation was made under another name so we didn’t know in advance that he was coming. When they called us my husband checked the security cameras from home, then came in and told me to get dressed … it was him.”

Many of the Scarpa’s Lakeland customers are also frequent visitors to Boca Grande, so some business will be carrying over.

“Polk County has a lot of people who also go to Boca Grande,” Ashley said. “A lot of our regulars are also regulars at The Temp.”

The couple originally found their way to the island in 1985 when Ashley’s father, a district manager for Publix, won a prize in a contest that was a stay at Turtleback.

“If that hadn’t happened we may never have found this place,” she said. “My parents had eight children, they literally saved all year long to take us on vacation. He loved this place so much, this is where we started to come every year. He passed away five years ago, but he would love the fact we are opening a place here. He would be over the moon.”

Ashley and Glen will be bringing their 17-year-old son Brecken with them from time to time when they start the commute back and forth from Lakeland to Boca Grande. Brecken and Glenn are both avid fishermen, and Brecken one day hopes to become a fishing guide.

Glen also has three daughters – Kacy, Jessie and Sandy – who are grown and are off on their own. They will be stopping by though from time to time, no doubt.

When peak season hits Ashley said she expects they will be staying here half the week and in Lakeland half the week. It will be grueling, but to Ashley it will be worth it.

“Boca Grande is really where we wanted to be,” she said. “We were patient and now it has happened.”