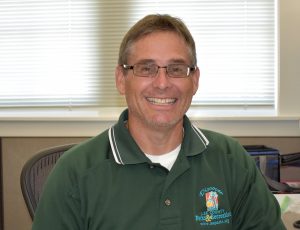 Everyone who is familiar with Lee County Parks & Recreation senior program specialist David Bartels will be sad to hear the news that he will be leaving the island on Wednesday, Sept. 11.

Bartels, who has been with the parks department for almost 12 years, is leaving to pursue his two businesses and to help care for a family member in need of some assistance. He started working on the island in January 2008.

He and his wife, Kinga, are certified Scuba instructors for Fantasea Scuba in Port Charlotte. They also own Dream Vacations, Deep Water Travel agency. The travel consultants are avid travelers and are known to put together package dream vacation deals around the world for local Scuba enthusiasts.

“I’m turning a page in my life and unfortunately will no longer be working on the island,” Bartels said. “Unless someone would like a private scuba lesson or help with travel plans, then I’d be happy to help.”

Bartels came to Boca Grande by the way of Grayslake, Ill, with a considerable amount of experience in working with community programs and children. He has been involved in the recreation and youth field since 1994, using his abilities and qualifications to, as he calls it, “… create and maintain procedures, resolve problems and communicate effectively between employees, volunteers, members and the community.”

He first came to Boca Grande to scuba dive around the lighthouse, and was later offered a position as a senior program specialist by the Boca Grande Community Center through Lee County Parks and Recreation.

“It’s a very community-service based job,” he said. “I’ve met a lot of very nice people over the years. I am definitely going to miss them. I feel that I have made a good impression on the people who have used our facility and I always tried to be as friendly and helpful as possible.”

The athlete naturally fell into his line of work due to his love for sports. Growing up, he played basketball, baseball football and recreational volleyball and got into wrestling from eighth grade through college. Currently, softball is still his game, with scuba diving being his most passionate hobby.

With a rather tongue-in-cheek sense of humor, David was a perfect fit at the Boca Grande Community Center.

Surely the summer camp students from The Island School – as well as many other people in the community – will miss him as well.

“I would like to say thanks for the memories,” he said.

Be sure to stop by and say goodbye to David by this Wednesday, Sept. 11.