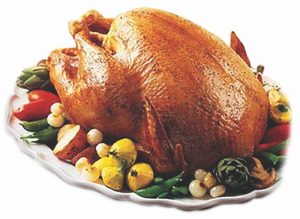 BY OLIVIA CAMERON- The community has taken precautions to ensure the safety of the public, so the last thing you want to do at a time like this is make your family sick from an overly thawed or undercooked Thanksgiving turkey. Managing partner and senior trainer Ron Pavlick of the Hospitality Training Group has revealed the most common ways people get sick over the holidays, and it all starts in the kitchen.

First and foremost, this year has made us rethink the number of times we wash our hands in a day. The holiday season is no exception to personal hygiene. There is a chance of bacteria spread and cross-contamination if hands are not washed frequently when cooking with a variety of foods.

When it comes to cooking the turkey, it’s important that it is properly thawed before the process begins.

“Many people tend to take this frozen turkey from the freezer and place it directly on the kitchen counter, but you’re not supposed to do that,” said Pavlick. “Instead, thawing it in the refrigerator is much safer.”

Pavlick recommends letting a frozen turkey thaw in the fridge for a few days prior to being cooked. Of course, it depends on the weight, but packages often list instructions if needed.

The reason Pavlick warns against questionable thawing is that there’s a fine line between safe and unsafe temperatures. Foods have the potential to reach the “danger zone” if not kept at the right temperatures. Food borne bacteria can rapidly multiply when food sits out and reaches the zone between 40 and 140 degrees Fahrenheit. Frozen foods are at risk of becoming contaminated with said bacteria when their temperature rises above the refrigerator temperature of 40 degrees.

“Every 20 minutes that food sits in the danger zone, pathogens double. These pathogens are responsible for food borne illnesses,” said Pavlick. “The more pathogens that are in the food, the more likely you are to get sick.”

Cross-contamination easily occurs when a knife is used to cut raw meat and another food item without being rinsed in between.

Of course, when a turkey is cooked, it must be cooked fully to eliminate the risk of serving meat laden with pathogens. “One of the biggest mistakes made involves not monitoring the temperature of the turkey,” said Pavlick.

“Some ovens may not be properly calibrated,” said Pavlick.

When saving leftovers, Pavlick suggests that foods left out for a couple of hours should not be kept.

Pavlick stated that the statistics of those who get sick from eating poorly prepared foods are staggering. According to the Centers for Disease Control and Prevention (CDC), there are 31 identified pathogens that cause food borne illness, and many other causes are unspecified. Some of the most commonly identified pathogens include norovirus, Salmonella and Clostridium perfringens.

However, once the turkey is cooked just right, you can relax and enjoy a nice home-cooked meal with gravy on top.

Newer PostA new and different look at the Christmas Walk this year: Golf cart decoration contest, Santa, shopping and more
Older PostLETTER TO THE EDITOR: They are at it again! Suncoast Humane Society is building the future