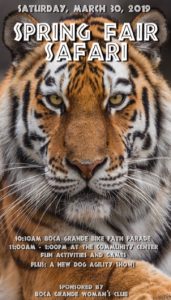 Come to the Boca Grande Spring Fair and Bike Path parade tomorrow, Saturday, March 30. Since 1986 the Spring Fair has been an annual island tradition, sponsored by the Boca Grande Woman’s Club as a gift to the entire community. Island children, visiting grandchildren and the young at heart can reveal their creativity by decorating a golf cart or bike to participate in the “Safari” parade and can let loose for a few hours of excitement and fun at the Spring Fair.

The theme of the Fair this year is “Safari,” which can be interpreted as a wildlife or nature journey anywhere in the world. A parade along the Bike Path opens the festivities. Decorate your golf cart, bike, or scooter and join in the fun as the parade rolls along the Bike Path, led by the Lemon Bay High School band.

The Boca Grande Historical Society will serve as honorary Grande Marshall. Participants in the Safari should assemble on the Bike Path at 5th Street at 9:50 a.m. (Late entries may register at 9:45.)

The parade starts at 10:30 a.m. and ends at the Boca Grande Community Center at 11. Prizes will be awarded in several categories.

After the parade, the Community Center will be the site of a fun-filled fair from 11 a.m. to 1 p.m. The grounds of the Community Center will be magically transformed by the Woman’s Club into a children’s playground. Staffed by volunteers from the Woman’s Club, the Safari Fair will include animal balloons, many carnival games, a cake walk, a photo booth complete with props for silly pictures, pony rides, a clown, a petting zoo, a dog agility exhibit (new this year) and much more.  For those with hunger pangs, there will be hot dogs, hamburgers, drinks, sno-cones and popcorn. The popular bake sale will be there with homemade casseroles, soup, bread, cookies, cakes and desserts.

Newer PostThanks for the memories and another great Spring Fair
Older PostWant to make an ecological difference right at your own dock? Mini Reefs: A small but important step for cleaner water