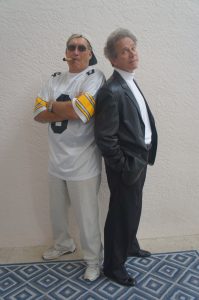 SUBMITTED BY RPP – Royal Palm Players has a simple strategy: FUN. Everything RPP does is supposed to be fun for the people in the show, working behind the scenes and most importantly, for the audience.

This time, RPP has topped itself in the FUN category!

In an unusually ambitious move, they are producing both versions of Neil Simon’s comedic masterpiece ‘The Odd Couple.’ On alternate nights, you can see the male version originally written in 1965 and the female version written in 1985. Simon penned both and they are equally funny.

In fact, this production is double the FUN.

Everything is doubled – the shows, the casts, the crews, the number of

performances. Everything except the Director. The exceptionally talented Tad Ingram has taken on this enormous task and somehow manages to create two hysterical plays that are similar without being the same.

The RPP run begins with two wonderful actors, Terry Seitz as Felix and Mike Gilbert as Oscar. Their neat vs. sloppy tug of war as they learn to live together is the heart of the show. As Felix, Terry treats us to a one of the prissiest, most exacting characters we eve 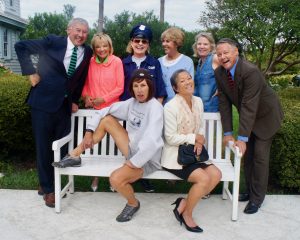 r seen on Boca Grande. Every move he makes is funnier than the last. His messy counterpart, Mike Gilbert creates an Oscar who is gruff, crude and also loving toward annoying friend and roommate. The depth of their relationship proves their acting goes far beyond easy laughs.

The guys are surrounded by a group of poker-playing friends, so Tad has cast a group of new faces and familiar RPP stars. Dan Headington plays, Roy, Oscar’s accountant known for his dry wit. Dan plays this role to perfection, even down to his pocket protector. Jim Grant, another familiar RPP star is marvelous as Speed, the most sarcastic of the friends. Hal McCombs plays Murray the Cop, a proud member of the NYPD who he has some of the funniest lines in the show. A new actor is John Moenning as Vinnie, the mild-mannered, henpecked butt of many of Speed’s jokes. The timing among the poker players is fabulous. The jokes fly as the cards playing heats up. Every member of this ensemble is on their game.

To add a spark of romance, Neil Simon created the Pigeon Sist 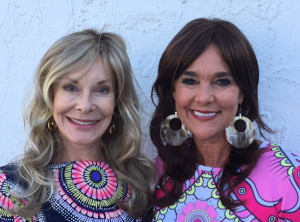 ers, two giggly English sisters who are invited to dinner at Felix and Oscar’s apartment. Nancy Ryan plays Cecily, a technical widow, while Margaret Bush is her sister, Gwendolyn. I don’t know if they were close friends before this production but I am certain they will be now. The moment they enter as two Swinging ‘60’s British Sisters, the story gets even funnier. Both Nancy, a new actor, and Margaret, a well-known American actress, seem to be having as much fun playing their parts as you will have watching them. They are a perfect together.

So the male version is a show you must see. But how does the female version stack up on the laugh-o-meter?

For starters, there’s the over-the-top comic presence of Boots Tolsdorf as Olive. Her deadpan way of dealing with her new roommate, Flo, is priceless. Like the male version, Tad has cast the roommates so they are a visual cue for the mayhem to come. Boots/Olive towers over her counterpart, Flo, played by new RPP actor Julia Pierce. (You probably know Julia’s mother-in-law, Jeje Pierce and are not surprised at Julia’s enormous talent.)

Instead of poker players, the audience attends a game of Trivial Pursuit. With RPP stars like Linda Rollyson, Sally B. Johnson, Karen Snyder and Priscilla Masselink, the audience knows it is in for something special from the moment they begin their scene. Although the Boca Grande audience has seen all four of these stars in other uproarious roles, the rapid-fire pacing and dry wit will have you falling out of your seat.

Simon reinvented the Pigeon Sisters as the Costazuela Brothers for the female version and I believe he outdid himself. As the dinner dates for Flo and Olive, Kris Doubles and his onstage brother, Ed Vick, are irresistible as the dates who speak ‘Englith’ with a lisp because they are from Barcelona. (I dare you to watch this scene with a straight face).

All in all, Tad Ingram has done an incredible job directing two completely different, yet similar, plays. With twice the normal RPP rehearsal period, no one has complained, except for a few spouses.

Erica Ress Martin, who conceived this idea, and Dan Headington produced both worked overtime building the set alongside Tad when no one was on stage. The Set Painting group had so much fun that everyone from actors to spouses (thank you, Blake DeBoest), from crewmembers to Board Presidents (thank you, Jim Sullivan) all joined together to get the stage ready for opening night. Then Alex Newberry designed the sound and lighting for each variation of this funny masterpiece.

You MUST see both shows if you want to see ALL of your friends accomplish a new level of laughter in Boca Grande. Both shows are raucous, side-splitting events, filled with joy. As Royal Palm Players promised, this is one battle of the sexes where everyone wins, especially the audience. Don’t miss it! It is FUN!

For more information, call Kathy at 964-2670 or stop by the RPP office at the Boca Grande Community Center. Ask her if there are any tickets for the show you want. Or you can buy tickets online at royalpalmplayers.com.

Newer PostCome check out some ‘Local Color’ at Whidden’s this weekend!
Older PostBoca Grande Food for the Poor event to feature many fine auction items