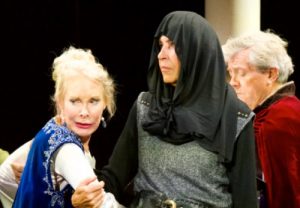 The time is 1183. “We are all barbarians,” says Eleanor. It is Christmas at King Henry’s chateau in Chinon, Touraine, in the medieval Angevin empire.

King Henry is played by a now familiar figure on our stage from Sarasota, Derek Dutcher. At the ripe old age of 50, the King is trying to decide which one of his three sons should be his successor.

Derek is the perfect image of a proud, prominent strong man whose great strength and dignity are being eroded by age and adversity from too many wars.

He delivers his entertaining quotes at times with wit, often with rage toward his sons, and with a gentle, cunning warmth toward his wife, Eleanor of Aquitaine.

He states, “I’ve snapped and plotted all my life. There’s no other way to be kind, alive and 50 all at once.”

The Eleanor that Alice Court brings to the stage is a woman with a fierce blood-and-guts determination for what she wants. She is at times warm and affectionnate, always beguiling, and very very tricky. Alice delivers some of the play’s best quotes with an edgy, haughty sarcasm when called for, a sharp-edged sword at other times, and a seemingly loving nature at the other end of her emotional spectrum.

Eleanor has been invited back to the chateau for the holidays from the prison that has been her “home” for 16 years since Henry imprisoned her for treason for plotting against him. Two of Eleanor’s delicious one-liners: to Henry as he professes his love, “Save your aching arches; that road is closed.” To her jewelry, “I’d hang you from the nipples, but you’d shock the children.”

The play is filled with shady machinations of the entire family, which also includes King Philip II of France (Hal McCombs), the son and successor to Louis VII of France, Eleanor’s ex-husband. He has given his half-sister Alais (Nancy Ryan), who is Henry’s current mistress, to whomever the future heir is and demands either a wedding or a return of her dowry.

The 24-hour holiday period is filled with various plots, alliances, lies and discoveries as the family schemes to try to make the King choose their option.

“Well, what family doesn’t have its ups and downs?” Eleanor remarks.

Richard, a strong warrior with an unflappable will for the throne, is brilliantly portrayed by Mark Masselink, who, as his mother’s choice, is determined to be the successor and is driven to get it by any means, entertaining the thought of killing his brothers and bringing his father to a duel. His relationship with his mother vacillates between wanting her love and realizing how she uses him for her objectives. He says, “You’re so deceitful you can’t ask for water when you are thirsty. We could tangle spiders in the webs you weave.”

Prince Geoffrey is the intelligent, best brain in a brainy family. Peter Powell, who we know on the town stage in musicals, plays him as a Machiavellian machine whose bitterness over not being a favored child is masked by an icy wit. Follow this quote: “I know. You know I know. I know you know I know. We know Henry knows, and Henry knows we know it. We are a knowledgeable family.” His clever plots and alliances are numerous.

We welcome Lew Hastings back on stage as John, the third son, who in spite of his “having pimples and smelling of compost” is the sweet-faced, spoiled, entitled, whiny choice of his father. Lew perfectly portrays the baby of the family with his emotional baggage on his sleeve. He can be heard saying, “Why am I always doing something dumb?” and to his father,”You don’t love me anymore.”

Philip Capet of France (Hal McCombs), depicts his personality with an open, direct attitude toward Henry, his English counterpart. He is simmering below the surface because he resents the fact that Henry has often bested his father, Louis, first husband of Eleanor.  Hal’s sardonic voice makes him a believable, shrewd competitor in this twisted game of conspiracy. Hal’s character is a complicated one, and he spars with Henry, inserting some venom when he asks, “How stands the Crown on boys who do with boys?”

And in 1183, we have to have a mistress. Henry consorted with “contessas, milkmaids, whores, gypsies, jades and little boys” and currently with Alais, a sweet pawn, played by Nancy Ryan, also from our musicals. Nancy plays her vulnerabilities, her strong will, so well that she is actually the only one in the story who seems to be honest. She announces to Henry,”You need me, Henry, like a tailor needs a tinker’s dam.”

In the end, nothing has been accomplished. Things are left as they were, hoping that by the next holiday there might be a more peaceful solution.

The set is minimal, with many scene changes, but the props are ingenious and the story gets told well. Stage Manager Boots Tolsdorf (new role), Robbie Stanley (her mentor), Andrea Nielsen, and Lisa Best, (also new) get tested. The costumes are phenomenal, expertly outfitted by our super-talented Arnie Preston. You will be in awe. Our own Kyle Rich is master technician of our new lights and music once again. Melissa Mutkoski is his assistant. Our Production Chair, Jeff Lehrian, rounds out the entire group.

Except, of course, for Director Meryl Schaffer, who tackled this very difficult and intricate plot of intrigue with integrity and spot-on interpretations. She came away from the first rehearsal with her soul filled with this play and anxious to impart the richness of the language to all.  And she did a great job.

This play is at times a comedy, so don’t forget to laugh. The quotes are numerous, the one-liners are memorable, the dialogue is razor sharp and fast-paced. Treat yourself to an evening of fun for Friday and Saturday, this week at 7 p.m. or Sunday at 5p.m. at the Boca Grande Community Center. You will be glad you did.

Photos by Dusty and Matt Gutman

Newer PostA history of miscommunication with Lee County: the Promenade
Older PostWe will miss you, CiCi