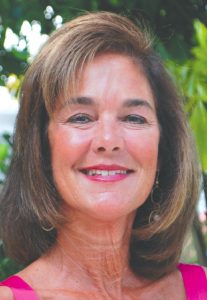 While island resident Maggie Bush was busy with play rehearsals here on the island last week, she was bestowed with a very big honor in the frozen lands of New Hampshire. Maggie won the New Hampshire Theatre Award for “Best Professional Actress” for her portrayal of Daisy in the the classic “Driving Miss Daisy.”

A stand-in accepted the award, but her fellow castmates at Jean’s Playhouse in Lincoln, N.H. were more than thrilled for her, as was Terry Seitz, another island resident who is Bush’s co-star in the Royal Palm Players’ upcoming production of “Present Laughter.” Seitz said this was a very well-deserved kudo.

“It is a huge honor just to be nominated, but to actually take home the ‘Oscar’ as the best is nothing less than astounding!” he said. “There were many from the island who actually made the trip to see her in this magnificent performance. It is literally a once-in-a-lifetime achievement. Although, knowing her talent, it would not come as a surprise if she repeated at some point.”

“Present Laughter” opens on February 13 and will be performed at the Boca Grande Community Center auditorium. Go to royalpalmplayers.com for more information.