Once again, RPP is going to captivate you ticket holders March 8 – 12 with a romping, romantic, riotous reprise. 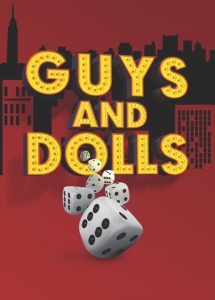 The musical, based on two short stories and characters and plot elements of other stories by Damon Runyon, premiered in New York in 1950 with music and lyrics by Frank Loesser and book by Abe Burrows. Critics spoke of the show as integrated, meaning that in this unique case, the book was written to fit the songs, when the reverse is the norm. Runyon was very familiar with the world of gangsters, gamblers and con men, who were all part of the underground world he ran with in New York when he worked as a reporter.

From this “real” world, he introduced the adaptable storyline of a respected high-rolling gambler, Sky Masterson, played and sung by RPP’s recognizable, capable Jeff Lehrian, who is great looking and can sell a love song with ease. Kimberly Whipple, our equally lovable songstress, shares the lead with him as Sarah, a puritanical missionary, whose soprano is spot on. James Martin, whom we laughed with in “Moon Over Buffalo,” is well cast as Nathan Detroit, a con man who is trying hard to find new life for his notorious illegal crap game, but without the dough to secure a good location. While Nathan tries to keep his business going, he is also trying very hard to avoid walking down the aisle with his fiancee of 14 years, Adelaide, a night club dancer at the Hot Box. Erica Ress Martin, complete with a super New York “twang,” sings and laments her frustrations with a comedic flair.

Nathan needs $1,000 and proposes a bet to Sky that Sky can’t take a woman of his choice to Havana, Cuba for dinner. Sky takes the bet and conjoles Sarah into going by promising her “one dozen genuine sinners” to help save her mission. Sarah gets a tad tipsy on “Havana milkshakes,’ and Sky realizes he is in love with her, only to be rebuffed by the pious Sarah because she wants an upright, moral man. Comedy prevails as bets are made, blank dice are used that have no dots on them, confessions are made, police break up crap games, crapshooters arrive at the mission to repent, but not really, fights break out in the Havana nightclub and promises are broken.

Until finally love prevails, and even Nathan gives in after Adelaide, in a very funny sequence, explains to him that she has told her mother for years that they have been married and in fact have five children. Sky pursues Sarah, and she learns the truth about the bet and realizes that Sky genuinely cares about her.

So in the end, Guy gets Doll.

Nathan gives in to Adelaide because he really cares. So Doll gets Guy. The show bursts to life from the fast-paced opening of “Runyonland” with its cops, pickpockets, con men and tourists around Times Square. With the use of the Theatre’s aisles and a wonderful third entrance to the stage, the movement of a large cast is flawless. And it continues through two wonderful acts of numerous solos, duets, entire cast numbers of such favorites a ‘Adelaide’s Lament,’ ‘I’ve Never Been in ‘Love Before,’ and ‘If I were a Bell,’ to name a few.

The crapshooters and songsters are an array of some who are new to the stage, as well as others you will recognize from previous musicals such as last year’s “Hello Dolly” and “Oklahoma!” Jacy Gabriel, Derek Dutcher, Gerry Miller as Big Jule, Hal McCombs, Bob Young, Stan Ikenberry, Fred Allerdyce, Jim Sullivan, Len Saari, Peter Powell and Jim Grant stand out particularly in the ‘Luck Be a Lady’ scene and are on stage much of the time. Mission supporters are Joan Kulukundis, Carol Ellwood, Lynda Grant, Julia Pierce and Cori Palmere. We are lucky to enjoy their trained voices. Nathan Forrester is Arvide Abernathy, a somewhat gullible member of the Save A Soul Mission and Lt. Brannigan is played by Dan Sandford, who is continuously engaged in a battle of wits with Nathan Detroit. Nicely Nicely is played by a slimmed-down version of Stubby Kaye, Ross Witschonke, who leads a rousing rendition in his well-crafted version of ‘Sit Down, You’re Rocking the Boat.’

Choreography is a huge part of this production with Chris Lee, who teaches TAP, providing us some of his best students in Carol Forrester, Nedra Lehrian, Mary Hancur and Kathi Hustedt. I know you will enjoy these flashy feet doing fast-stepping, intricate, intoxicating rhythms. And that is just the Tappers. Wait until you see the HOTBOX girls, Erica Ress Martin, Arnie Preston (who is also the costumer AND the music director), Elaine Skypala, Jane Deutsch, Carol Forrester, Andrea Neilson and Robbie Stanley (who also happens to be assistant stage manager).

A big shoutout to Kimberly Whipple for creating wonderful dances for the cast. Kimberly has worked tirelessly for these creative numbers. And then there are the fancy steps of the Crapshooters, and the rest of the cast who fill in for vital roles throuout the play: Dodie and Dan Headington, Steffi Pressman, Nancy Ryan, Sarah McDonald and Nancy Garraghan. I have listed 38 cast members! And many couples: Grants, Headingtons, Forresters, Lehrians. That’s one way to spend some time with your signifigant other! Last but certainly not least, there are the props, with Nancy Wallace in charge. There is our faithful, trustworthy and incredibly talented technician, Alex Newberry.

There are our musical accompanists, long-time steady, dependable Mary Jeanne Moorman and Bill Whitney, showing incredible talent on piano and drums. Assistant accompanists are Inga Toi and Fred Allerdyce. Once again, our co-producers are Bill Whitney and Linda Rollyson. Randy Bell assumed the huge role of stage manager for this bunch.

All of these folks are very important to putting on this musical. A musical without music?

No one to keep everyone on track? No one to work the lights? No costumes? No choreographers? Believe me, it takes a village, right? And the village needs a chief, a CO if you will. That would be Todd Patterson, the director who was also the director of “Hello Dolly.” RPP knew we had a keeper then, and gloriously he returned and has done another masterful job! He keeps everything humming right along and seems to really enjoy it.

Even when you know the jokes are coming, the cast will keep you laughing and caring about these over-the-top characters. For a little while, you will forget those outside-the-door problems and leave humming a few tunes. This promises to be another feather in Boca Grande’s RPP’s cap. We have so much talent on this island! So get yourself down to the RPP office at the Community Center, or go online to get those selling-out-fast tickets. You can certainly find time to go to one of the performances, as RPP has given you 6 chances: Wednesday, March 8, Thursday, March 9, Friday, March 10, and Saturday March 11 – all at 8 p.m. On Sunday, March 12 there will be two performances, one at 1 p.m. and one at 5 p.m.

And oh, if I left someone out of this fantastic lineup in this ever-popular production, I’m sorry. Guess I was handed the wrong envelope.