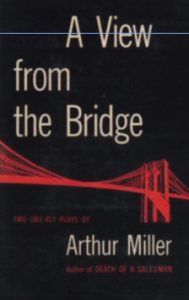 Continuing a long-standing tradition, Royal Palm Players will present a reading of Arthur Miller’s “A View from the Bridge” on Thursday and Friday, Jan. 10 and 11, at 5 p.m. in the Boca Grande Community Center auditorium.

Though the presentation is free, you must have a ticket, which is obtainable from Kathy in the RPP office (964-2670). The reading takes the place of the normal January Literature Forum meeting.

Pictured are most of the cast members gathered for a recent rehearsal.  From the left are Dan Headington, Ed Vick, James Martin, Sally B. Johnson and Priscilla Masselink.  Missing is Jim Grace.

A View from the Bridge was first staged on September 29, 1955 as a one-act verse drama with “A Memory of Two Mondays” at the Coronet Theatre on Broadway. The run was unsuccessful, and Miller subsequently revised the play to contain two acts; this version is the one with which audiences are most familiar. The two-act version premiered in the New Watergate theatre club in London’s West End under the direction of Peter Brook on October 11, 1956.

The play is set in 1950s America, in an Italian-American neighborhood near the Brooklyn Bridge in New York. It employs a chorus and narrator in the character of Alfieri. Eddie, the tragic protagonist, has an improper love of, and almost obsession with, Catherine, his wife Beatrice’s orphaned niece, so he does not approve of her courtship of Beatrice’s cousin Rodolpho. Miller’s interest in writing about the world of the New York docks originated with an unproduced screenplay that he developed with Elia Kazan in the early 1950s (titled “The Hook”) that addressed corruption on the Brooklyn docks. Kazan later directed “On the Waterfront,” which dealt with the same subject. Miller said that he heard the basic account that developed into the plot of “A View from the Bridge” from a lawyer who worked with longshoremen, who related it to him as a true story.

Newer PostAuthor Fred Rich to speak at the Fust Library on January 8
Older PostThe Stevenson home: A house full of whimsy and delight