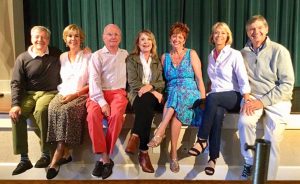 What happens when four couples dare to deal with the differences in their relationships? Well, it’s complicated.

Once again, the Royal Palm Players have produced a hilarious show – Peter Quilter’s “Duets.” Yes, it’s about relationships, male and female relationships, specifically, yet it is not an examination of romantic love. Instead, it’s a hysterical look at why the grass is never really greener.

Originally written as a tour de force for two actors, directors in 20 different countries around the world have chosen to perform it with up to eight of the most talented actors available. After reading “Duets,” Meryl Schaffer, RPP’s artistic director, realized it was a perfect fit for eight of our own talents. Meryl’s desire to encourage new talent led to casting several people our audience hasn’t seen. To further the development of our island talent base, she then split the directorial duties with Priscilla Masselink, which gives Boca Grande a talented new director to call on during the season.

The entertainment begins with the satirical one-act comedy, “Blind Date.” If you’ve ever experienced a blind date, then you know all the feelings of hope, fear and usually disappointment that accompany dates like this. You can’t help but laugh at the very funny Karen Snyder and brand new actor John Thomas as they portray two 50- plus singles. Their banter as they try to protect themselves from the inevitable awkwardness of a failed blind date by planning a pre-date is a riot. “I tend to go for women who are young and beautiful,” Jon confesses to Wendy. “But that didn’t work out, so I thought I’d give you a try.” Wow! A blind date who doesn’t know the perfect thing to say. You may have heard of guys like that from your friends before, but I guarantee it was never as funny as this.

In “Secretarial Skills,” Ms. Schaffer wisely paired Ned Lehrian with her real-life husband Jeff. You’ll recognize Jeff as the dashing leading man who starred in many of RPP’s big musicals. Several seasons ago, Ned decided to join him onstage, and you’ll recognize her as one of the popular Tappers. In “Secretarial Skills” the Boca Grande audience has an opportunity to see both of them step out of their respective comfort zones and rely strictly on comedic timing and chemistry. And it works. Barrie, Jeff’s character, is not remotely interested in women, but that doesn’t stop Janet (Ned), his assistant, from hoping to turn her executive assistant position into the more permanent position of wife. The surprise on his face when she grabs him and plants a big kiss on his lips is priceless.

Priscilla Masselink directs “The Holiday,” the third piece in this quartet of comedies. It’s not surprising that Priscilla proves to be a talented director, for her talent as an actor is well known. Cori Hane Palmere and James Martin star as a soon-to-be-divorced couple on their last vacation together in Spain as they finalize their divorce. Watching this talented twosome drown their sorrows with cocktails and pithy dialogue is a lethal combination. Their wonderful timing and gleeful performance is certain to make you laugh out loud.

The effervescent performances of Hal McCombs and Sally Johnson in “The Bride To Be” are a perfect way to end an evening of fun. This dynamic duo stepped into their roles just a few weeks ago, when the original cast dropped out for personal reasons. (Hurricane Irma was one issue.) Bad omens and the ruination of her wedding dress cause the characters onstage great stress, while causing great amusement among the audience. Should she or shouldn’t she go through with her third wedding? After all, she’s not planning to make a habit of it. Watch for the moment coffee is accidentally spilled on her eggshell-colored wedding dress – it is played to comic perfection.

Carol B. Forrester designed the beautiful costumes and props, while Alex Newberry, one of RPP’s founders, created the magical moods through sound and lighting.

If you’re looking for a fabulous night of entertainment, don’t miss “Duets.” It’s quirky, endearing and a lot of fun. Just like our own Royal Palm Players.