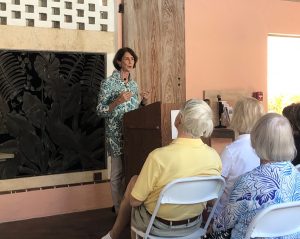 BY OLIVIA CAMERON – The Boca Grande JF Library Foundation once again welcomed Roxana Robinson to speak on a recently published biographical novel. Published in May of 2019, “Dawson’s Fall” was based on the lives of Robinson’s great-grandparents and revolves around a paradox of beliefs for people during the Reconstruction era. Robinson has claimed the work as a biographical novel because of its hold to history.

At her talk on Tuesday, Feb. 18 at the Johann Fust Community Library, she gave insight into her assortment of letters and diaries from around 1889 and read select portions of her novel to give a taste of the tragedies and moralities of the time.

“The way I came to write this book was thinking about my family,” said Robinson. Her great-grandparents in which the story follows had left many documents behind concerning their lives around the Civil War and the war on land. “These two are footnotes in the larger story.”

Robinson wrote her piece in order for it to be a scholarly document that could be referenced. Her American story poses a question to all readers: How can you admire something you’re not fully proud of?

“I started on a mission of how I could be proud of my family history despite not believing in some of what they stood for,” said Robinson. Her confusion led to the inspiration for such an American story.

How true can her novel get? Well, it all comes from protagonist Dawson, who would go to an opera he’d never see and return home to play the music from it. “That is exactly what my father used to do,” Robinson said. “It gave me chills to hear.”

The documents drawn upon now reside mainly at Duke University.

On Thursday, Feb. 27 at 4:30 p.m. The Johann Fust Library Foundation is honored to present Rebecca Eaton, executive producer-at-large for “Masterpiece,” as their guest speaker for the 2020 annual benefit.

Eaton took the helm of the PBS productions “Masterpiece Theatre” and “Mystery!” in 1985, and later oversaw a highly successful re-launch of “Masterpiece,” which attracted a new generation of viewers.

Eaton’s presentation will be given in the Boca Grande Community Center auditorium, which is already sold out, but simulcast tickets are available now. Call 964-0211 for more information.