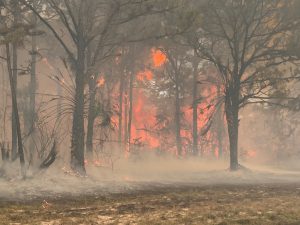 As of 6 PM Charlotte County Fire and EMS and the Division of Forestry have officially declared that 250 acres were burned by today’s fire. There were two minor firefighter injuries. Fire is still 95 percent contained, they’re working on several hot spots, and they will be working through the night and for the next few days.

BY KELLI BECTON – Approximately 60-80 acres of Rotonda Lakes and Rotonda Sands were destroyed by a wildfire on Monday, Feb. 24. Although it was a close call and there was some exposure damage, firefighters were successful in keeping it from damaging any homes.

The fire was reported at 11:24 a.m. as a 1-2 acre brush fire. Dry conditions and heavy winds exacerbated the situation and it quickly became a larger fire. At 3:22 p.m. it was officially announced as contained. 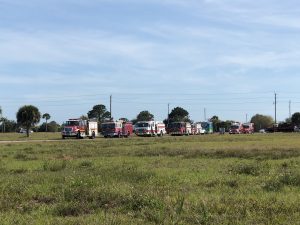 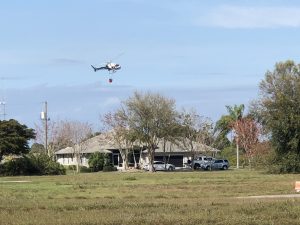 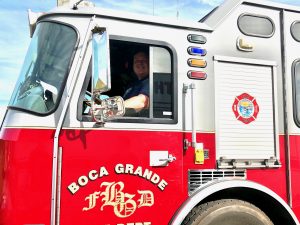 According to Charlotte County Public Information Officer Todd Dunn,  there was a big group involved in bringing the fire under control. Boca Grande, Englewood, and North Port played major roles. There were two strike teams called in from Lee County, and one from Manatee County as well. The Division of Forestry sent seven units, two helicopters, and a fixed wing airplane. Charlotte County also sent in a helicopter.

A total of 40 homes were evacuated, with no injuries reported and no homes lost.