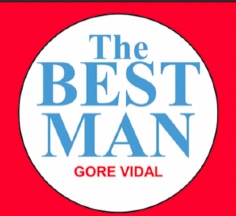 Political intrigue combined with moral and ethical dilemmas. We’re not referring to this year’s mid-term elections, but to Royal Palm Players’ fall production of “The Best Man,” written by Gore Vidal. Meryl Schaffer directs this staged reading. A wonderful cast full of familiar RPP actors, as well as a few new faces, performs.

The play is set in Philadelphia in the year 1960, and the scene is the presidential nominating convention. Former Secretary of State and candidate William Russell, played by Mark Masselink, is a Harvard-educated intellectual and current frontrunner. His opponent is Senator Joe Cantwell, portrayed by Lew Hastings as a populist “man of the people.” Both candidates hope to gain the endorsement of former President Art Hockstader, depicted by seasoned RPP actor Jim Grant.

Team Russell includes his estranged wife Alice, his academic campaign manager Dick Jensen and Catherine, his campaign aide. Jack Carley makes his stage debut playing Jensen, and Robbie Stanley appears as Catherine. This is Robbie’s first acting role with RPP, although she has been stage manager for many recent Royal Palm Player productions. The shy but sharp Alice Russell is brought to life by RPP veteran actor Lynda Rollyson.

On the Cantwell team we have a feisty campaign manager in Rose Blades, played by RPP familiar Lynda Grant. Kimberly Whipple skillfully portrays Senator Cantwell’s wife Mabel as a shrewd Southern belle with a bite.

Each nominee has an opportunity to leverage an ugly detail from his opponent’s past, and colorful characters are introduced to thicken the plot. Two newcomers fill those shoes: Laurie Ducharme appears as Dr. Artinian, a psychiatrist who is summoned to challenge a smear, and Robert Levine plays Sheldon Marcus, a former army buddy of Senator Cantwell. Robert is not only new to the RPP stage, he is also new to BG.

Several other characters in this timely and engaging production keep the action rolling to the end. Sue-Ellen Gamadge, played deftly by Carol Elwood, looks to bring the vote of the American housewife to the future nominee. Peter Powell portrays Senator Carlin, described by the playwright as “a ponderous politician of the prairies.”

Appearing throughout the play is a lineup of reporters and photographers crowding the candidates with flashing bulbs and shouted questions. This crew of characters is performed by Ginny Williamson and Marilyn Barton, who are new to our stage, along with veteran performers Hal McCombs and Gerry Miller.

Although written in 1960, the play’s themes and personalities could easily be transported to today’s political arena. You will be surprised by the ending (no spoiler alert here), which gives us hope that perhaps it is in our nature to do the right thing. These incredibly talented actors convey all the nuances of character and bring to life the amazing words written by Mr. Vidal.

Sit back and enjoy. And may The Best Man win!