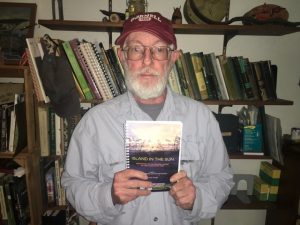 ■ BY SUE ERWIN – A retired Cornell University professor from the Department of Horticulture applied his knowledge of Cayo Costa’s natural history and plants and turned the information into a book.

“Island in the Sun: Reflections on the natural history of Cayo Costa State Park” was written by Ken Mudge in Ithaca, New York.

Over the years, Mudge and his wife have visited many of the state parks in Florida, and he considers Cayo Costa “the best of the best.”

Mudge became fascinated with horticulture as a young man when he began working for a landscaper.

“That’s where my interest began,” Mudge said, “but my teaching has been in forestry farming.”

His research focuses on the agroforestry practice of forest farming, with a particular emphasis on forest-cultivated mushrooms.

“About 15 years ago my wife Beth was looking for a place to vacation and selected the island of Cayo Costa off of a map,” Mudge said. “We’ve visited many Florida parks, but once we visited Cayo Costa, we just kept returning to the island.”

Cayo Costa is a 2,426-acre Florida state park managed by the Florida Department of Environmental Protection. The island was first inhabited by the Calusa Indians, then Cuban fishermen in the late 1800s. Today a few residents own cabins.

According to Mudge’s book, Cayo Costa is the only Southwest Florida island that has been relatively unspoiled by development.

“The other four barrier islands have been shaped by the same processes as Cayo Costa, but they have been tamed by man in terms of extensive developments of roads, condos, etc.,” Mudge said. “Only Cayo Costa remains nearly as pristine as it was before the Spanish ‘conquered’ the New World.”

“Island in the Sun: Reflections on the natural history of Cayo Costa State Park” is a two-part book. The first half is about the early formation of the island, the amenities the state park offers and details of a tram ride from the bay side (east) to the beach side on the Gulf. Mudge calls the tram ride the “15-minute plant diversity tour.”

On the “diversity tour,” you’ll see six different communities of plants (out of a total of 12), beginning with the Mangrove Swamp Community on Pelican Bay near the landing docks. As you travel westward, you pass under the live oak trees of the Maritime Hammock Community into a Coastal Grassland Community Mudge identifies as a “seasonal desert.” Still traveling west, you’ll enter the Coastal Strand Community, where some cabbage palms that survived Hurricane Charley still stand in the area that was planted with gumbo limbo and sea- grape. Finally you’ll reach the Beach Dune Community and the Gulf of Mexico.

The sixth, and last, plant community Mudge covers in his book is the Shell Mound Community, which covers the smallest footprint of the five mentioned so far. It has more significance because of its anthropologic origin (the mounds are Calusa Indian middens). These middens were refuse sites for shell fragments accumulated by the Calusa Indians.

“Over centuries these shell mounds became quite extensive, and some of the few on Cayo Costa rise nearly 15 feet above sea level,” he said.

The second half of the book covers the phytogeography of Cayo Costa. “Phytogeography” simply means “where the plants are.”

Mudge described the plants that are found in the six plant communities in the book: seagrapes, saw palmetto, marlberry, coral bean, wild coffee and many others.

Mudge is planning a second book on the remaining six plant communities and the animals found on Cayo Cosa.

“Thinking back, I am amazed how much I have learned from Cayo Costa,” Mudge said. “The geology is more complex than meets the eye. It’s not just a pile of sand. I’m convinced that walking around with your eyes wide open is the best way to learn about nature. Hopefully this book will serve as a guidebook that allows the reader to take a systematic approach to learning about Cayo Costa.”

Mudge’s books are self-published and self-promoted, and all of the proceeds from the sale of the book go to Cayo Costa State Park.

“Island in the Sun: Reflections on the natural history of Cayo Costa State Park” is available at the concession stand at the Cayo Costa Camp store, the Boca Grande Lighthouse Museum store and on Ebay for $20 each, plus shipping.