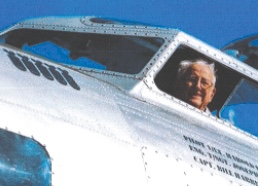 The Air Force veteran completed primary training in Illinois and basic training at San Angelo, Texas – which, he recalls, was just a big dirt field at the time.

He flew his first combat mission on August 26 – just six months after earning his wings. Initially assigned to the 74th Bombardment Squadron in Panama, he went on to serve nearly 29 years in the United States Army Air Force and the U.S. Air Force in a variety of roles.

All are invited to the service on Christmas – you do not have to be a member of the church to come and celebrate. There will be a coffee/fellowship hour following the service.

The church is located at 380 Gilchrist Ave. in Boca Grande.