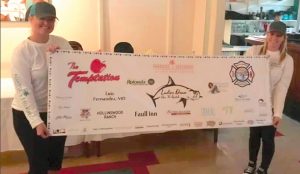 The weather was a little stormy for the 4th annual Ladies Draw: Mix ’n’ Match on Saturday, July 20, but morale was high among the 10 teams of four women each that fished the Pass that day. It brought about another win for Capt. Lamar Joiner Jr., and the 2019 tarpon season was officially put to bed.

On the Searene team, the day was filled with excitement as they took first place. Capt. Lamar and his anglers – Terry Joiner, Sarah Joiner, Kim Joiner and Leslie Edwards – were over the moon to win cash and other prizes. In second place on the Jill Marie, Capt. Dave Chatham and anglers Jill Chatham, Cannon Wenzel, Valerie DeLavergne and Effie Joiner were more than happy as well. In third with the last fish caught in the tournament were Capt. Blake Cheske and anglers Dorothy Duso Hubbard, Kristie Coleman, Dagmar Nielsen Kershaw and Liz Woodruffe aboard Outtaline.

In all, 12 tarpon were released during the tournament.

The tournament was the brainchild of Kacy Joiner Cheske and Amber Mills, two island girls whose family has been here for generations.