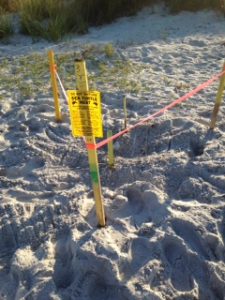 The Boca Grande Sea Turtle Association would like to remind everyone to be cautious this Fourth of July weekend regarding the sea turtle nests and potential hatchlings on the beach. Fireworks and other lights on the beach can disorient nesting adults and hatchlings, and beach trash can interfere with a hatchling’s journey from the nest to the ocean.

“Fourth of July is always an active weekend, with many people at the beach and many swimmers in the water. We would like to remind boaters to take it slow and watch for turtles surfacing (and manatees),” a spokesperson for the organization said. “And please keep pets on leashes, do not leave trash on the beach and turn lights off near the beach at night.”

Nesting activity continues to be high and hatching has begun, although due to the later start of nesting this year, hatching is a bit light but is expected to escalate within weeks. No new strandings have been reported.

On May 22, 2016, a loggerhead turtle was stranded on zone 7 (between 3rd and 4th street). With the help of the Boca Grande Fire Department, the turtle named “Tucker B” was transported to Mote Marine Laboratory in Sarasota for rehabilitation. It had some minor, older wounds and appeared very lethargic. For the first week, Tucker B didn’t show much interest in eating, so he was given fluid therapy and force-fed a few fish. On May 31, Tucker B started eating on his own. On June 23, Tucker B started to forage food. His blood work has improved, so antibiotics have been discontinued. You can check the status of the recovery progress at https://mote.org/hospital/patient/tucker-b.

A tiny sea turtle hatchling is about the size of a ping-pong ball. A volunteer patrol member said that because hatchlings are easily disoriented and at risk of death from predators, it is important at this time of year to keep lights off near the beach. Only about 1 in 1,000 turtle hatchlings survives to adulthood. (Source: http://myfwc.com/research/wildlife/sea-turtles/florida/faq/). Once a new nest is discovered, patrol members excavate it and count each egg. The information is then sent to the Florida Fish and Wildlife Conservation Commission, where it is entered in a national database. These data help track the health and activities of the species.

The Boca Grande Sea Turtle Association’s latest report for turtle nests showed that nests have increased for both green sea turtles and loggerheads. As of June 17, the association reported 297 Loggerhead (caretta caretta) turtle nests and 6 green sea (chelonia mydas) turtle nests on the island. The latest numbers are expected to be announced next week.

The BGSTA is actively looking for volunteers. Training and supplies are provided. If you’re available a few days a week to assist, go to facebook.com/seaturtleawareness to find out more details.