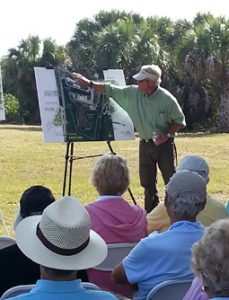 Committee Chair Bayne Stevenson of the Gasparilla Island Conservation and Improvement Association unveiled a large reproduction illustrating the envisioned GICIA Preserve at a public meeting held on Wednesday, April 13 at the property, located at Gasparilla Road and the Boca Grande Causeway.

He thanked the crowd for the support of the project over the past few several months.

“This property was purchased thanks to your donations. Our vision is to have a landscape design in context with what we already have. Ideally, our goal is to have protected land going into the village,” Stevenson said.

The results will replicate the bike path landscape, with abundant fruited trees to attract sea birds and low plants in shallow waters to attract shore birds.

The general contractor for the project will be All Phase Construction, Inc. which will oversee the demolition work to be performed by Forristall Enterprises, Inc.

The docks and tennis courts are going to be removed first, and then the nine buildings on the site will be demolished.

The new docks, once they are installed, will be used by sheriff’s deputies, fire and emergency crews and the U.S. Coast Guard.

“We think it’s very important to have the presence of the deputies on the site,” Stevenson said.

Misty Nichols, executive director of GICIA, said there will be signs posted stating the docks are strictly for emergency vessels only.

“We also want to protect the sea grass in the local waters,” Nichols said.

Rick Joyce, certified arborist, said the goal is to do everything they can to make the marshes effective for wildlife.

“We are so fortunate to be able to do such wonderful ecological work here. The migratory birds will easily find nourishment in this preserve, and we have been working with FWC on sea and shore bird nesting areas,” Joyce said.

The area is already a federally designated site for juvenile sawfish.

Stevenson said that once the demolition starts, he expects about a six-week timeframe for it to be completed, depending on the Osprey fledglings. Permits are in process to relocate the nest once the fledglings have abandoned it.

Roger Debruler, Charlotte County marine resource program assistant, is in charge of the artificial reef construction program and will lead the effort to have recycled blocks of concrete, which must weigh at least 1,000 pounds, barged to the two fully permitted reef sites in the Gulf – one ten miles offshore, one eleven miles.

Stevenson said that although the project is still in the proposal stage, he believes the organization is on the right track.

• To prevent impactful development at the gateway to Boca Grande

• To ensure that the Preserve will have limited public access to protect the critical nesting areas of shore birds and wildlife.

There will be no public parking facilities. Access to the Preserve will be controlled by the GICIA and limited to GICIA-sanctioned member tours.
The GICIA plans to have sanctioned and educational events aimed at promoting ecologically sensitive land use. The organization hopes to become a model for other sanctuaries and preserves.

The GICIA embarked on a fundraising campaign on November 5, 2015, in an effort to raise enough funds to purchase the 30-acre Mercabo property at the entrance to Gasparilla Island. On January 29, 2016, GICIA successfully closed on the purchase, having raised $20.6 million in seven short weeks.

For more information on the project, visit thegicia.org.