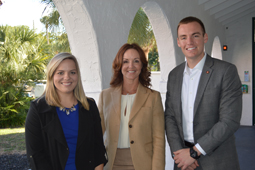 An informal roundtable discussion with State Senator Lizbeth Benacquisto was held on Thursday, January 5 at the Boca Grande Community Center.

Residents were invited to come and discuss a variety of issues with the Senator representing District 30. A variety of topics were discussed, including the completion of the new swing bridge, the Johann Fust Library, the GICIA Preserve and the water district.

One resident noted that the bridge is a classic case of how government can work directly with private authority groups to create a plan, manage assets and create a positive outcome. The agreement between Lee County and the Johann Fust Library Foundation in 2012 was pointed out as another example of how partnerships between governmental institutions and private foundations can work to benefit the community.

All who attended agreed that growing a strong economy would affect the country in a positive way and would trickle down to strengthening the local economy, as more tax dollars would be spent in this area. Benacquisto served as one of the 29 electors in the 2016 presidential election.

“It was a unique and interesting experience,” she said. She attended the Republican national convention in Cleveland this past July and was selected at that time.

When asked about the president-elect, Benacquisto said she is rooting for him to do a great job and move our country forward.

Regarding her thoughts about reforming the current healthcare system, Benacquisto said she thinks Congress is preparing to address the issue after President-Elect Trump takes office. “I’m not a part of that governmental body, but I’d hope that when there is a repeal of the Affordable Care Act, it keeps in mind that those premiums are being paid by hard-working Americans, and the policies need to remain affordable. The results should include access to care and also hold folks accountable for maintaining their own healthy lifestyles,” she said.

An attendee pointed out that Gasparilla Island State Park is the second most frequently visited state park in Florida. The senator added that those numbers will probably continue to increase, as national publications have recently named this area one of the best to visit in the state.

Another resident said that what happens directly across from the bridge (referring to Charlotte County) greatly impacts decisions made regarding Boca Grande. He pointed out the success of the Gasparilla Island Conservation and Improvement Association (GICIA) project to raise funds to purchase the 30-acre Mercabo property at the entrance to Gasparilla Island and turn it into a protected preserve.

The senator said she and her fellow legislative members have vigorous discussions in every session regarding the future of healthcare and the state education system. She discussed the health of the water in southwest Florida in regard to the flooding of Lake Okeechobee and how it has adversely affected Florida’s coast.

“There is no shortage of ideas on how to solve the problem. Each one would cost hundreds of millions of dollars, but when it comes to preserving our resources for future generations, there is no question that we will come to a resolution, and it is an issue that will be front and center this year,” she said.

The senator ended the discussion by welcoming residents of Boca Grande to share their ideas and concerns about any issues relating to the island. “I am here to help. As long as you let me know what’s concerning you, I’m always ready to listen,” she said.