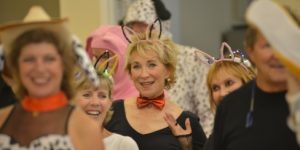 If you hear the sounds of laughter coming from the Crowninshield tonight or tomorrow night, it’s just the sounds of an audience having great fun at “Rescue Me, Too!”

Like last year’s successful “Rescue Me” musical review, 27 of Boca Grande’s favorite stars have gotten together to put on a brand-new show for the benefit of the Suncoast Humane Society. A new state-of-the-art facility is desperately needed by the animals and by those who take care of them 24 hours a day. In 2017, Elsa and Peter Soderberg pledged a generous seven-figure donation, and the capital campaign began. Now, breaking ground for the new facility is imminent.

What makes this benefit so boisterous?

Well, unlike most performances, it is a completely collaborative effort. Erica Ress Martin, the director/co-producer, recruited the cast from her friends at RPP and Grande Glee. Together, they came up with ideas for songs, dances and comedic routines. Together, they embraced the idea of singing as dogs and cats looking for long lasting love – in furry costumes.

Peter Soderberg and Jeff Moore start the show bantering about the shelter and a new million-dollar matching grant that needs to be fulfilled by this April. The passion they have for this project is the perfect way to launch an evening filled with singing dogs and dancing cats begging for your love.

Then the real fun starts.

The entire cast parades in, singing “Rescue Me,” the song Aretha made famous. Seeing so many of our Boca Grande talents in costume is hilarious. A big Dalmatian comes running down the aisle trying to lick and nuzzle those seated on the aisle. It’s actually Gary Cross, from the Barnichol, so don’t worry if this pup gets too close.

Roger Lewis, the co-producer/writer of this memorable evening, also serves as the master of ceremonies. His jokes, punctuated by the drum rolls of Bill Whitney, Boca Grande’s own Buddy Rich, give the show a vaudeville feeling.

A pack of Huskies come on stage next, singing “Be My Baby.” Linda Rollyson sings lead, backed up by James Martin and Scott Wise. Their rollicking rendition of the Ronettes classic will leave you howling.

John Moenning performs “Can’t Take My Eyes off of You,” as a pound puppy with all the soulfulness that you can imagine a real shelter animal must feel. Then a Dalmatian stuck in the shelter from the old west enters. It’s Rebecca DeRosa singing ‘Don’t Fence Me In.’ The dog’s ears coming out of her cowboy hat just add to the merriment.

Have you ever imagined Peter Soderberg as a big brown dog? In this show, he and his real rescue dog, Benny, take the stage as two older pets performing “Wouldn’t It Be Nice.” We have to admit Peter has a lovely voice, but Benny still has to work on some of those notes.

Ross and Pat Witschonke serenade the audience with “I Will,” the love song written by Paul McCartney for the Beatles. Pat is the perfect puppy looking for love, with Ross as her rescuer. Together, they find long-lasting love. Off stage, as many of the audience members know, Ross and Pat share a long-lasting love and marriage, which comes through every lyric they sing to each other.

Up next is “Bocaminster,” a hysterical spoof of the Westminster Dog Show featuring animals available for adoption right now. Jerry Edgerton and Elaine Skypala are the overbearing commentators, gushing over each canine and feline, describing why each would be just right for life on Boca Grande. “He promises not to drool outside of Hudson’s,” is one line everyone loves.

The always well-dressed Michael Alexander hops on stage as a big pink bunny. Yes, Suncoast sometimes has bunnies available, too. While his version of “Mr. Lonely” is wonderful, the carrot he waves at the audience heightens the laughter and cheers.

As most islanders remember, RPP’s big musical two seasons ago was “My Fair Lady,” starring Julia Pierce as Eliza Doolittle. Terry Marks, the Suncoast Director of the capital campaign, never saw that production, yet she thought the song “Wouldn’t It Be Loverly” would be a fabulous fit for this evening of mirth. Fortunately, Julia agreed, and with several of her former cast-mates, she put together a group of harmonizing pups. Scott Wise, Ross Witschonke and Fred Allardyce add to this loverly, lovable, joyous number. Special thanks to Joshua Chase Gold, the director of RPP’s musicals. Your brilliance keeps shining through.

Then the Tappers dance on.

The talented Chris Lee choreographed “Me and My Shadow” as  homage to the glamorous Rat Pack. Robbin Gilligan and Kathi Hustedt use top hats, clapping and complicated tap moves to shadow each other as they plead with the audience to adopt them. It’s a dance you won’t soon forget.

Charleigh Grossman, a beautiful 9-year-old singer direct from Los Angeles, comes on next with her pretend grandfather, Jerry Edgerton. Charleigh’s talent is so much bigger than her size. When she begins “How Much Is that Doggy In the Window?” you’ll forget she’s younger than most of your grandkids. As Jerry Edgerton leads Charleigh off carrying a stuffed dog, Elaine Skypala slinks in as a Las Vegas sex kitten. (Think Ann-Margret.) “Hey, Big Spender” is captivating for her voice, as well as her moves.

The fun keeps going when Fred Allardyce enters. He’s singing Elvis’ great hit, “Are You Lonesome Tonight?” only he’s singing in a big, fluffy Dalmatian costume. His superb sound juxtaposed against his outfit is something only a great performer can pull off.

Next up is a down-on-her-luck Hollywood dog. It’s Erica Ress Martin singing “I’m Still Here” as she mourns her lost puppy years. Ending with a wail worthy of any mutt craving attention, a man comes to adopt her. It’s Gary Martin, her real-life husband. When he says, “This mutt looks like she’s pretty high-maintenance,” everyone roars with laughter – except Erica.

Two cockney cats follow. It’s Joan Kale and Karen Snyder, singing and dancing to “I’d Do Anything,” from the musical “Oliver!”  They are adorable as they convince each other, and the audience, that they will do anything for you. Watch for the big ending when they fall into each other’s arms.

Scott Wise takes the stage in a fuzzy dog suit. His mellifluous voice is an incredible counterpoint to his costume as he performs “Will You Love Me Tomorrow?” By the way, Scott flew down from Manhattan weeks earlier than he usually arrives just so he could star in this fun-raiser. That’s the kind of dedication this amazing group of Boca Grande talents brings to us.

To make sure no one forgets how alone these shelter pets feel, Sharon Ponte, Grande Glee’s musical director, comes out to sing, ‘On My Own.’’ Sharon portrays a kitten lost without a family. The audience cheers as she hits the notes many of her Glee members only dream about.

Carol Elwood, Jan Waters, Kathi Hustedt, Karen Snyder, Joan Kale and Robbin Gilligan then catwalk onto the stage. Carol sings a gorgeous version of “I Feel Kitty” in a pink boa, huge cat paws and big cat ears. Yes, this is taken from “West Side Story,” but thanks to an idea from Julia Pierce and Karen Snyder, it’s been made more relevant as they all sing, “… and I pity any cat who isn’t me tonight.”

James Martin, doing his best lounge lizard imitation, bursts onto the stage singing, “What’s New Pussycat?” His velvety register is sooooooo Tom Jones as he flirts and dances with each kitten.

For the big finish, the cast comes out singing “You Are the Sunshine of My Life.” Everyone is still in costume, still having fun. It’s a moving moment as all the performers raise their arms in joy.

Special thanks go to Mary Jeanne Moorman. Her beautiful piano accompaniment makes the actors feel secure. And to Michael Hilton for the sound and lighting design that make the evening work so vividly.

“Rescue Me, Too!” is produced by Spark Boca Grande – a group led by Erica Ress Martin and Roger Lewis. Spark is on a mission to ignite the interests, talents and creativity of the Boca Grande community through productions for other not-for-profits.

“Rescue Me, Too!” is at the Crowninshield this Friday and Saturday at 7 p.m. Don’t miss this night of furry fun. Tickets are available at bocagrandetickets.com. Or take a chance and see if you can still get a general seating ticket at the door.