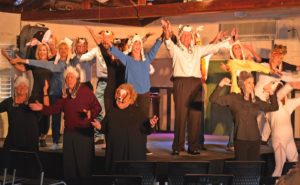 Last night, the Crowninshield was filled with the sounds of music, laughter and fun as 30 of Boca Grande’s favorite performers dedicated their talents to helping the Suncoast Humane Society’s capital campaign. A state-of-the-art facility is desperately needed by the animals sheltered at Suncoast and by the volunteers and staff who care for them 24 hours a day.

Elsa and Peter Soderberg pledged a million dollars to start the capital campaign. Other Boca Grande folks also opened their hearts, minds and pocketbooks, but millions more are needed. So Erica Ress Martin had an idea. She asked friends from RPP and Grande Glee if they would like to be part of a show singing love songs to pets. Not surprisingly, over 30 talented people said “YES!” And that’s how “Rescue Me!” was created.

Working as a collaborative group, the entire cast added ideas, wrote their own lines and created an evening unlike anything Boca Grande has seen before.

It began with a rousing performance of the song Aretha made famous – “Rescue Me.” The singers marched in wearing animal hats, setting the tone for the fun to come. As they sang, a big furry hound paraded down the aisle licking and pawing members of the audience. Imagine everyone’s surprise when they realized it was Bob Fletcher inside that dog suit! The laughter was a great way to begin the evening.

Then Peter Soderberg and Jerry Edgerton spent a few minutes talking about why the new facility is needed. Like the friends they are in real life, they finished each other’s thoughts asking the audience to please take a tour of the current Suncoast building.

Carol and Nathan Forrester, the first duet, were truly believable as a couple looking for a shelter pup. Of course, they are a real couple in real life. Carol pointed to a life-sized cutout of a collie, and Nathan said they needed to get to know it first. Their wonderful duet of “Getting To Know You” had the crowd cheering as they decided this pup was “… precisely their cup of tea.”

Roger Lewis, one of the island’s favorite MCs, kept the rest of the show moving with his witty humor and charm. Each of Roger’s intros had a punch line introducing the very next song. Bill Whitney, Boca Grande’s own Ringo Starr, underscored each joke with a drum roll, giving the production a vaudeville-like feeling. Aside from keeping the audience laughing, it gave stage managers Sharon Sullivan and Robbie Stanley time to set the stage for the next song.

When Jerry and Peter came back on stage to perform “Still The One,” they brought Benny, Peter’s real dog, as their prop. And yes, Benny is a rescue. The guys looked like they had almost as much fun singing as the audience had watching them. Benny is truly a star in the making. He loved being cuddled on stage.

The scene turned sober when they left. John Moenning gave a short speech about a very special dog in his life. Then he began a moving rendition of “Through The Years.” By the time he finished, there wasn’t a dry eye in the house.

To raise the emotions of the audience back to a collective high, Linda Rollyson and Elaine Skypala performed “Calendar Girl.”  They took the crowd through twelve months of delight in beautiful harmony. It was tempting to shout out each month along with them.

Next up was a sheep dog puppy in the arms of Julia Pierce. She sang “Till There Was You,” tickling the pup’s belly while it licked her face. Her amazing high notes delighted the audience almost as much as the fact that the dog was a puppet. It looked so real, and Julia had us all fooled. She seemed to love that pup so much, and it seemed to love her, too.

A hysterical spoof of the Westminster Dog Show followed – Bocaminster. Two overbearing commentators were played to perfection by Ann Fletcher, one of our Boca Grande stars, and Gary Martin, who is new to our stage. A parade of photos brought out comments on why these pets were perfect for life on our island. “He’d love to learn to ride a golf cart,” is one line the crowd loved.

After all the discussion about mixed- breed cats and dogs, a mutt took the stage waiting to be adopted. The mutt turned out to be Erica Ress Martin, who sang a soulful version of “Maybe This Time,” howling at the end. The audience was delighted when a man, who turned out to be her husband, decided to adopt her. Gary got laughs when he noted, “This mutt is probably pretty high maintenance.”

Jim Sullivan, long-time Boca Grande favorite, then took center stage. His gorgeous version of the Elvis hit, “Can’t Help Falling in Love With You,” reminded the audience how much they loved his musical talent and how much they miss seeing him in RPP’s shows since his move to Fort Myers. Jim and his wife Sharon came back to work on this show because they are supportive of the Suncoast capital campaign and are always happy to share their talents for a worthy cause.

Two cowpokes carrying stuffed animals followed. As the cowpokes strutted out, the audience realized it was Ross and Pat Witschonke. They performed “You’ve Got a Friend in Me,” stunning the audience with their final notes as she went high and he went low. It was fabulous.

A Shirley Temple look-alike dragged her father on stage as she wondered, “How Much Is That Doggie in the Window?” Ann Fletcher was adorable as the little girl begging her dad for a pup. Jerry Edgerton, as her dad, kept refusing as she manipulated the situation. He finally relented, and she lifted her shirt to celebrate, revealing underpants that had “ARF ARF” written in spangles. The audience went wild.

Then Jim Sullivan, Linda Rollyson and Elaine Skypala entered, arguing about the animals they picked for adoption. Linda applied for a cat but picked a dog. Elaine applied for a dog but picked a cat. When Jim suggested they switch, they burst into an electrifying version of “My Guy,” hugging their pets. No one wanted the song to end.

Once again, this cast surprised and delighted everyone.

John Thomas came on next, carrying a huge stuffed black Labrador. He and the stuffed animal performed “Me and My Shadow,” with John dancing around while the dog stood still. It was enchanting. John’s booming tones captivated the audience, while he and his shadow danced off to great applause, then the Tappers danced on.

Everyone loves the Tappers. They are everything the rest of us wish to be. So when Carol B. Forrester and Robin Gilligan continued “Me and My Shadow” as a tap dance, the applause was nonstop. With a routine reminiscent of Frank Sinatra and Sammy Davis, Jr., they shadowed each other’s moves. Using top hats, clapping, tapping and exceptional dance moves, this was one number we’ll always remember. Special thanks to Chris Lee, the Tappers instructor and choreographer. He is terrific.

To remind everyone not to forget the ones they loved, Sharon Ponte, the musical director of Grande Glee, performed “Don’t Forget Me.” She was adorned in angel wings, carrying her puppy, Bijoux, who was similarly dressed. As Sharon’s angelic voice hit the notes that many in Grande Glee are working toward, Bijoux just wagged her tail, pleased to be the center of attention. Don’t worry, Bijoux, we won’t forget you.

After an adorable performance by a puppy, the kittens took over.

The adorable cats froze in place when suddenly the music changed.

James Martin roared onstage, swiveling his hips and doing his best lounge lizard impersonation to “What’s New Pussycat?” As he flirted with the kittens surrounding him, the crowd roared in response. His voice was wonderful but his acting…oh, oh, oh, oh, oh!

Then the entire cast paraded out to sing “You Are the Sunshine of My Life” as the show ended. It was warm, funny and moving as all thirty performers raised their arms in joy.

Afterwards the cast commented that they felt secure, because Mary Jeanne Moorman was on piano and Bill Whitney was on drums for the show. Michael Hilton brought his talents to sound and lighting, working with everyone for only a few short days.

“Rescue Me!” was a spectacular way to raise awareness of the Suncoast capital campaign.

The fact that so many talented people wanted to participate is a testament to how everyone feels about their pets.

“Please Take a Tour of Suncoast” was the message of this monumental effort. Only they managed to say it in a wonderful, memorable way.

Newer PostFarewell, 41: An island mourning the loss of a truly great man
Older PostAuthor Robin Lloyd to speak regarding ‘Harbor of Spies’