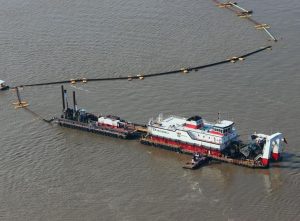 BY MARCY SHORTUSE – We are one step closer to having a little more beach to our name. On Tuesday, April 23 The U.S. Army Corps of Engineers of Jacksonville awarded a $6.4 million contract to a company from New Jersey for what they call “reducing risks to landside infrastructure in the Lee County portion of Gasparilla Island.”

Weeks Marine of Cranford, N.J. will be dredging and placing approximately 161,000 cubic yards of sand on our eroded beach, 1.4 miles of new shore in and north of the historic district and approximately 0.4 mile at the south end.

According to USACE, that should bring us to a full restoration point. They will also be tilling the beach and mapping the hard bottom, performing construction/vibration control and monitoring, turbidity and environmental species monitoring, beach fill remediation and incidental related work.

Hard bottom monitoring usually includes surveys of the bottom and extensive information gathering to determine where the best places to dredge the sand are. They will also be performing additional mapping research regarding underwater resources and topography that provide habitat, food and shelter to smaller species of undersea life. In some areas of Florida, private homeowners have attempted to take beach renourishment into their own hands, which has often led to disruption of habitat for undersea and beach wildlife.

This project is federally funded through the Flood Control and Coastal Emergency Act and Bipartisan Budget Act of 2018. According to USACE, it is expected that the project will take about two months to complete the project, which is scheduled to start in late May.

There was a project created in 2013 to renourish the south end of the beach that was similar to the 2007 Gasparilla Island Shore Protection Project, but when it came time to start carrying that plan out it was determined the USACE permit had expired. At that time, the Historic District beaches had already undergone renourishment years before.

Newer PostGIBA sends out RFP for dove management, mulls over property lines and talks tags
Older PostLadies will howl, earth will be honored this weekend