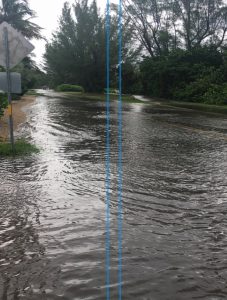 Last week people passing by the Range Light on Gulf Boulevard witnessed a Lee County crew digging a drainage ditch along the roadway. Many were impressed with its depth, which was about 4 feet, and recognized the need for the project. After all, every time a heavy rain comes through, we end up with six to eight inches of water on the road there, in what many call “Lake Surprise.”

Now, however, that ditch is filled in. It disappeared as quickly as it was created, after the Gasparilla Island Water Association realized that the bottom of the ditch was only about three inches away from a major water main.

“The crew uncovered a water line from the utility,” Said Lee County Public Information Officer Timothy Engstrom. “That line will need to be lowered before the drainage project can proceed. The utility will determine when that can happen.”

The County had to put in a “dig locate” ticket with GIWA, as anyone would have to if they intended to dig. The dig depth is routinely listed as deeper than the workers actually dig, but in this case it was not exaggerated.

When the problem was brought to the County’s attention, they said they would remedy the situation, review the problem and postpone dealing with the matter. Now it might be next spring or summer before the troublesome area is looked at again.

Heavy rains in late August, followed closely by Hurricane Irma, put a lot of water in the ground around the island, exacerbating the flooding situation.