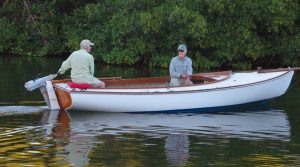 Recently a small but very meaningful ceremony took place on the island that honored the boat-making skills of the Seibert family, just after the loss of island resident Tim Seibert.

Tim’s father designed the boat shown here, named Lotus. She is a 20-foot sloop designed in 1944 but not actually built until the 1960s. He waited many years to see the design come to fruition, but with a little tweaking of the plans from his son Tim and some help from legendary Sarasota boat-maker George Luzier, she was finally completed. Tim and his father had many good sails on the boat, but Tim sold her to a friend in 1972. According to Tim’s wife, Lynne, he was always regretful about doing that.

This past summer Tim finally re-acquired her, knowing that his neighbor, writer Tom McGuane, was a perfect fit for Lotus. Tim sold the sloop to Tom, who got her back in tip-top shape and launched her at this event. “I have had some wonderful sailboats in the last half century, including three Herreshoffs, but Lotus is exceptional by any standards,” McGuane said. “Lotus is a beautiful boat and sails as well as she looks. I hope to keep her active as an ongoing tribute to Tim and his father.”