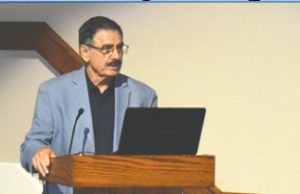 A panel of several scientists spoke to a sold-out crowd at the Boca Grande Community Center on Friday. Jan. 15 about harmful algae blooms (HABs), courtesy of the Barrier Island Parks Society and Mote Marine.

Mote Marine CEO Michael Crosby greeted the guests and thanked them for their continued interest in learning more about the red tide organism, Karenia brevis.

“We are very proud of Mote and very pleased to be partnered in this forum with BIPS,” Crosby said. “Many of you know from discussions held over the years that naturally occurring red tide is always present; it becomes a problem when it becomes a bloom. It’s harmful because it excretes a neurotoxin that is a principal agent in our environment. Florida is so rich in nutrients that every human could leave the state and there would still be red tide blooms.”

“We were formed in 1995 around the Charlotte Harbor area, and we now serve more than 5,000 square miles of estuaries in the area – including Lemon Bay, the Peace and Myakka Rivers, the Caloosahatchee and all of the waterways that drain into Charlotte Harbor,” Iadevaia said.

CHNEP is a partnership with all of the coastal and inland communities in a 10-county, 25-plus city area.

“We recently expanded to incorporate the freshwater portion of the Caloosahatchee River and part of Lake Okeechobee,” Iadevaia said. “It’s a partnership with your local governments and your county, state and federal agencies that are operating in this area – and that requires  funding and all of them coming together to work on issues that make a difference. There are many issues that one entity cannot fix, but under the umbrella of CHNEP it’s possible.”

Iadevaia urged the audience to contact their political representatives in the area and support the bills.

“Meet, call or write a letter to your local legislature and let them know your concerns,” she said. “We actually have a resolution in front of the House and the Senate Companion Bill (HP791 and SB1608 that would support recurrent, dedicated funding for our four national estuary programs in Florida.”

Yonggang Liu from the University of South Florida said the college utilizes a site called wateratlas.org, which was designed to help meet the needs of local governments by providing the means through technology to connect multiple stakeholders in water resource management.

“The atlas serves as a one-stop data warehouse, which provides unprecedented access to a wealth of water resource information, Liu said. “This information is presented in a variety of ways, including interactive graphs, tables, maps and graphics, so as to be understandable to both water research professionals and those people simply interested in learning more about the water resources within their area.”

Megan Cabot, veterinary intern at the Clinic for the Rehabilitation of Wildlife (CROW) on Sanibel Island, shared a veterinarian perspective on harmful algae blooms. She said 50 percent of marine mortality events are associated with HABs.

“As humans we can read signs that say ‘don’t drink the water’ or ‘don’t eat the fish,’ but unfortunately our wildlife doesn’t get those warnings,” Cabot said. “When wildlife are affected, they serve as sentinels to give us a heads- up that something bad is coming.”

She said about seven percent of marine animals treated last year at CROW were sea turtles, 11 percent were pelicans, and the rest were various bird species.

“In the last five years we have seen about 1,000 patients affected by red tide,’ Cabot said. That represents about 10 percent of our annual case load, and the treatment costs about $75,000. And we are a nonprofit teaching hospital, so all of the money comes from private donations.”

Associate Vice President for Research and Senior Scientist at Mote, Dr. Richard Pierce, said the organization has done extensive research on red tide in Boca Grande over the past year, thanks to a generous family on the island that shared their waterfront property to do testing.

“Our laboratory has been using ozone, a very oxidizing chemical that destroys organic matter, including red tide cells,” Pierce said. “We also found that, at appropriate levels, it can also destroy red tide toxins.”

A sophisticated ozone treatment and filtering system was used last February in Boca Grande to purify Gulf water. “We found it to be quite effective in water taken from residential canals,” Pierce said.

Dr. Crosby ended the event with closing remarks, and guests were invited to a reception after the presentation in the Woman’s Club Room.

Barrier Island Parks Society will be hosting another event on Tuesday, January 28 that will include author and artist Blair and Dawn Witherington, who wrote the book “Florida’s Living Beaches,” among others.  This duo will speak about the wonders of our local beaches and showcase some of Dawn’s widely recognized artwork that is used in many local environmental and conservation areas.