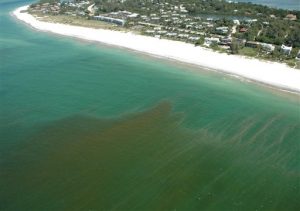 We’ve recently seen a glut of news stories regarding all of the algae in the water, of all different shades and hues. We’ve been under a red tide warning for quite some time now, as the bloom that hung out off our coast since last fall came onshore and gave us a major fish kill in the end of June. As the stories come out, though, so does the confusion. What is the difference between red tide and blue-green algae? Are the causes all manmade? Which ones do we have here in our area?

We’ve put together a list of common misconceptions regarding our Harmful Algae Blooms (HABs), so it’s a little bit easier to understand. These answers have been documented by scientists at Mote Marine Laboratory & Aquarium in Sarasota, and with the National Oceanic and Atmospheric Administration, and that’s about as good as it gets in terms of factual accuracy.

According to the NOAA, a HAB “occurs when plants that naturally live in the sea and freshwater grow out of control while producing toxic or harmful effects on people, fish, shellfish, marine mammals and birds.” Red tide is a generic term for a HAB, and so is the term blue-green algae.

Mote Marine Laboratory & Aquarium in Sarasota has been working with the NOAA, the Gulf of Mexico Coastal Ocean Observing System, the Florida Fish and Wildlife Conservation Commission (FWC), the Florida Department of Health, the University of South Florida, Solutions to Avoid Red Tide and others to learn more about this particular water-quality issue that has been plaguing us more and more in recent years.

1) What is red tide, and what are blue-green algae?

Both are forms of “algae” but have different requirement and lifestyles, so to speak. In the current situation the blue green algae bloom is up in the river (freshwater for now) and the red tide, which cannot tolerate lower salinity, is in the Gulf.

Red tide is known by the name Karenia brevis, and it is one of the most well-known types of HABs. K. brevis is found year-round in our waters, usually offshore, and a normal concentration level is 1,000 cells per liter or less. According to the FWC, “Blooms develop in four stages. The initiation stage occurs when a K. brevis population first accumulates and moves into in an area. During the second stage, growth, the population steadily increases. Within a few weeks, K. brevis concentrations may be high enough to kill fish. The third stage is maintenance, during which wind and currents control the bloom’s movement. If the bloom moves inshore, nutrient runoff from land may promote bloom expansion.

“A bloom can linger in coastal areas for days, weeks or even months. The fourth stage is dissipation or termination. During this stage, mechanisms such as winds and currents disperse the cells, introduce new water masses that reduce the concentration of K. brevis cells or move the bloom to a different area.”

Prior to the early 1970s, red tide was believed to originate inshore, but scientists have since found that it begins in nutrient-poor water 11 to 46 miles offshore.

Cyanobacteria, known also as blue-green algae, have been found in fossils that date back more than 3 1/2 billion years.

Blue-green algae in the water in high concentrations, like we are currently seeing in the Caloosahatchee River as a result of infected water released from Lake Okeechobee, depletes oxygen in the water by blocking sunlight, which kills submerged vegetation.

2) Where did these types of algae come from?

Blooms of K. brevis originate offshore, according to all historical scientific fact, without fail. Manmade pollutants that include high nutrient levels can feed the bloom – there’s no question about that – but man does not create red tide.

The first documentation of red tide was in the 1700s. Most blooms have been found to last three to five months.

Blue-green algae bloom is a HAB that prefers fresh and brackish water. This organism also mutates with temperature and salinity changes, and its point of origin is onshore.

The bloom of blue-green algae that is so widely publicized has come down the Caloosahatchee River from Lake Okeechobee. The lake is completely congested with very high levels of cyanobacteria right now, and when the lake levels started to rise, water was released down the Caloosahatchee to the west and east out to Port St. Lucie.

Blue-green algae love manmade nutrients, and they are considered to be the primary reason Florida experiences high levels of the foul stuff – everything from agricultural runoff (that includes cattle, chicken and pig farms as well as citrus and “big sugar” runoff), lawn and golf course runoff that is full of fertilizer nutrients, and the pollutants that come with big cities such as Orlando, where there are very large numbers of people living, not to mention the amusement parks.

We recently experienced one of those massive kills at the end of June and the beginning of July, but kills of that magnitude have been recorded since the early 1800s, and some non-scientific information has been found as far back as when the Spaniards first came to the state.

In humans, K. brevis can make your eyes water, and it can make you sneeze or cough; some people even claim to get headaches through prolonged exposure. People with exaggerated respiratory problems such as asthma and COPD are told to stay away from the beach when there are K. brevis warnings.

Red tide can also make humans sick through the consumption of shellfish that are contaminated.

Blue-green algae are a bit worse. If your intake of blue-green algae is significant, you can experience anything from hay fever symptoms to liver failure.There is strong research that reports exposure to cyanobacteria such as blue-green algae blooms could lead to increased risks of ALS, Alzheimer’s and Parkinson’s.

According to FWC reports, “Although the presence of cyanobacterial toxins in reservoir systems used for drinking water is of potential concern in Florida, there have been no documented illnesses directly related to drinking water containing these toxins. Water treatment plants can effectively treat for one type of toxin – microcystins. These toxins can result in skin irritation, swollen lips, eye irritation, earaches, sore throats, hay fever-like symptoms (sneezing and runny nose) and fatigue after swimming in affected lakes.”

Cities (such as Cape Coral) south of us that are currently experiencing severe blue-green algae blooms have reassured residents that the drinking water supply is hundreds of feet below the surface of the earth, but they warn people not to have too much exposure (none if possible) to the river and canals containing these cyanobacteria.

4) Do we have red tide here, blue-green algae here, or both?

Yes, we have red tide in moderate levels. No, we have not experienced any blue-green algae.

We are currently under a red tide alert right now but have been downgraded from “high” to “moderate” levels (as predicted by NOAA through Monday, July 16). So yes, we still have some levels of red tide in the water, but there are some people on the beaches and fishing. Right now the water looks relatively clear, with just a tinge of murkiness.

Your comfort level should determine what your course of action will be as far as going to our beaches that have red tide warnings in affect, but keep in mind that if you have respiratory problems you will notice it. If you have a compromised immune system or large, open wounds, swimming is not advised (which holds true in most summer months in Florida anyway).

In order for us to experience any of the blue-green algae present in Cape Coral and southward, it would have to be a slow trickle effect from water tributaries that intermingle between the Peace River and the Caloosahatchee. Charlotte Harbor is not as affected by outflow from the Caloosahatchee River (where the water from Lake O has been discharged for a very long time), because of the loop current which directs the majority of water through the Gulf of Mexico, around the southern peninsula of the state and into the Atlantic.

You must also take into account the fact that blue-green algae are not as much a fan of salt water.