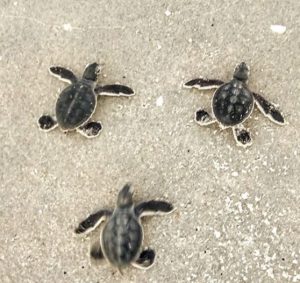 Greens had a record-breaking year on the island and in southwest Florida this year, with 22 nests hatching over the past few months.

The number of turtle nests has not increased over the last three weeks, indicating that the end of nesting season is near. The season officially ends on October 31. If you are interested in volunteering next season, find out more details on the BGSTA Facebook page.

Boca Grande Sea Turtle Association Board member Mel Csank said nesting has come to a halt, and hatching is slowing down.

There were 624 turtle nests documented by patrol volunteers this season (22 were green nests and the rest loggerhead), and 592 false crawls have been reported. A false crawl occurs when a turtle makes its way onto the beach but doesn’t produce a nest. Patrol members said they expected a high number of false crawls in June due to the beach renourishment project.

Association volunteers would like to remind everyone to be cognizant of your surroundings when visiting the beach. Sea turtle nesting season officially began on May 1, and runs through October 31. It’s more important than ever to remember to cover up holes and knock down sand castles when visiting the beach. Always dispose of any trash, and remember – no lights at night.

The hatchlings that survive land predators like bobcats and coyotes, feed on small organisms living in seagrasses (called sargassum).