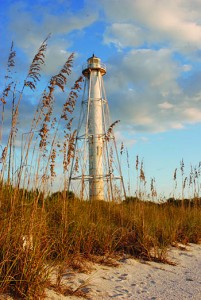 The Barrier Island Parks Society has announced they are in the final stages of a licensing agreement with the United States Coast Guard to transfer the Rear Island Range Light – now officially renamed as the “Gasparilla Island Light” – to island control after 89 years of ownership by the Department of Defense. They need the island’s help, though, to raise enough money to restore the light once it is in their possession.

The effort to obtain the light has been 30 years in the making by BIPS and other organizations. The transfer will allow BIPS to commence fund raising, restoration and perpetual maintenance of the structure and the 7.4-acre property. It also assures the beachfront property is spared forever from development of any kind.

The ultimate goal BIPS hopes to accomplish is to restore the Gasparilla Island Light to its 1927 splendor, the year it was brought to our island and rebuilt. The light was actually built in 1881 in Delaware. It was first lit here on the island in 1932 and is still an active aid to navigation, flashing every six seconds during the evening hours.

The light is currently in a state of rapid deterioration, both inside and out. Funds being sought are for historical reconstruction, sand blasting, painting, door and window replacement, cable-anchoring reinforcement, lens replacement and land cleanup. The costs are roughly estimated right now at between $1.7 and $1.8 million, but some bids are still outstanding.

Two globally recognized and award-winning historical lighthouse experts have been retained to work on the project, Alex Klahm Architectural Metal & Design of St. Petersburg and Kenneth Smith Architects of Jacksonville.

The project duration, once started, is expected to take between eight and 10 months. BIPS already has State of Florida approvals of their historical replication plans, and they hope to be able to scaffold, sand blast and paint the exterior during the summer and fall months.

A series of meetings including small island groups will be commencing soon, and all island residents and businesses will be receiving information packets in the mail.

All donations to support restoration of the Gasparilla Island Light will be tax deductible and should be made out to “The Light Keeper’s Fund,” PO Box 654, Boca Grande, FL. 33921. If you have questions you can call Jim Grant, Larry Hannah or any other BIPS director. You can also call the BIPS office at 964-0060.