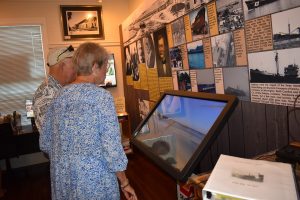 Gibson spoke in detail about the history of the railway in Boca Grande and the years of experience he had working with various railroad companies.

“In 1905, Charlotte Harbor and Northern Railway was formed, and in 1907 they opened services in Boca Grande,” Gibson said. He added that in 1905, many times the railway ran with mixed grade and passenger cars.

“I was in charge of all of our historical passenger cars that were used for special events – these would be political and charity events,” Gibson said. “I’ve been on them when they were in freight service, and that’s a very uncomfortable ride. You get a lot of side-to-side shock.”

The reason for the mixed freight and passenger operations here was phosphate.

The opening of Rockport Railroad Station in Tampa was the beginning of the end for the rail service to Boca Grande, and passenger service ended in 1959.

Following Gibson’s talk, members of the Boca Grande Historical Society were invited to come to an early preview of the new exhibit at the history center.

BGHS Board member and “Conductor” for the evening Jim Blaha handed out replicas of trip tickets from a 1947 excursion from Boca Grande to Jacksonville via the railway.

Items from the new exhibit filled the room at the history center from floor to ceiling. Some of the things to view included touch screen videos of phosphate mining in the area; a sample of dry phosphate pieces, tools showing how workers controlled the railways; a mock train display including active controls like whistle blowing and conductor codes, as well as simulating games for kids.

“This was a lot of planning and work in the making and we are so grateful to the Blahas, and all of the hard work and time they put in to making this a great exhibit,” said BGHS President KAREN GRACE. “We’ve never done anything like this before, and we hope people will come and see it, and also learn more about our new online archive system that is available on the website.”

The new exhibit is open now to the public.