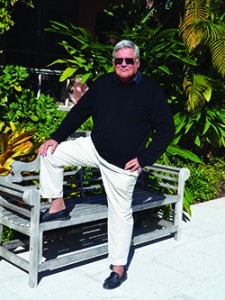 BY SUE ERWIN – Island seasonal resident and artist Jack Horner was born in Richmond, Virginia. He is retired from two prominent, parallel careers: one serving in U.S. Naval Intelligence for 28 years and another as a stockbroker for 35 years. And he has also been a watercolor, oil and pastel painter for 28 years.

He recalls visiting Florida every year during spring break with his wife, Kathy, and his two sons, Ashby and Sherman.

“For years, we would drive up and down the east coast of Florida, and then a friend suggested that we check out the west coast and visit Boca Grande. Once we saw it, we never went back to the east side of the state again,” Jack said. Sons Ashby and Sherman, however, still live in Richmond, VA.

It was when Jack first visited Boca Grande that he picked up an interest in watercolor painting. Jack said that when he retired from the Navy there was a void in his life, and that’s when he found out how much he enjoyed painting.

“Look at the composition on this island – everywhere you turn there is beauty,” he said. “It’s just amazing how many objects there are in the landscape that you never saw before. Painting makes you look at things in a completely new way, because you are really looking at things.”

Jack is a member of the Allied Artists of America, Virginia Watercolor Society and the American Artists Professional League. He has won numerous awards for his work.

When asked what inspired him to start teaching, he said he saw a void of male artists in the organizations he is affiliated with. The next class for “Dudes” will take place on Monday to Wednesday, Feb. 29, March 1 and March 2 from 9:30 a.m. to 12:30 p.m. The class is conducted in watercolor, as it is the most suitable medium for beginners and intermediate painters.

“One of the pitches I make for the ‘Dudes’ class is that it’s never too late to learn. You do it when you are ready to do it.” Jack said. “I do not propose to tell anyone how to paint. All I propose is to show you how to gain enjoyment.”

Jack recalls how Churchill once said, “I can think of no better way to obtain a retentive memory than through painting.” 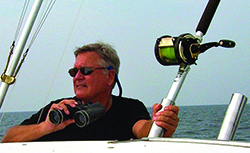 “It’s very informal, and whoever wants to attend can just show up – it’s an excuse to get outside and paint,” he said. “It’s representational painting, but it’s abstract composition,” Jack said about a painting he created on Banyon Street.

He organized a juried show in 2007 to commemorate the 20th anniversary of the alliance.

He arranged for prominent New York artist Everett Raymond Kinstler to jury an exhibition that was held in 2007.

“He put on a slide show and gave quite a presentation with many recognizable people. He had so many good stories to share. He talked about running into Katherine Hepburn here on the island, and how it was not uncommon to bump into her in Hudson’s Grocery store,” Jack said.

About six years ago, Jack and Kathy traveled to the French Riviera to visit friends. While there, he attended various locations where famous impressionists stood and created their paintings.

Jack painted in the some of the same locations as Monet and Renoir.

“It’s remarkable how similar the paintings compare. The landscape really has not changed in all those years,” Jack said, as he pointed to an original painting by Monet and the replica he did from the exact same location.

“I’m a nautical guy. I was brought up around boats and had several of them. Plus all that time in the Navy. Even though I was often on shore duty, I would drive by the piers every day and always was in awe of the magnificence of those carrier ships,” Jack said. “This is how the United States projects power ashore. When things start happening abroad, the first thing the President asks is ‘Where are the carriers?’ and that speaks for itself as to the power of the Navy.”

He recalls observing the ships come home from overseas and watching the huge receptions as the families of the servicemen and women eagerly awaited their arrival.

“It’s really quite massive. All the facets of the Navy are represented. They are all in uniform. Every one of those ships is historic.”

Jack said many who serve on the ships often try to save them and make them into museums, but unfortunately, most get towed away and are used for scrap, or they are scuppered and become reefs.

One of Jack’s paintings is of the U.S.S. Enterprise. The ship’s motto is, “We Are Legend.” Jack attended the decommission ceremony.

“She came to the end of her 50 years, so they brought her back to Norfolk. People gathered and cheered on the Norfolk Pier. That was right after Hurricane Sandy. The Secretary of the Navy was there, and while he was speaking, the newest carrier at the time, the George H. W. Bush, was going by. They had a signal flag up that said ‘Bravo Zulu Big E’ – that is Navyspeak for ‘Well Done, Enterprise’.”

Jack said he can see the ships coming and going from his porch deck in Virginia.

Several paintings of the ships appear on Jack’s website, and there will also be a few at the show. To view them, go to jackhornerartstudios.com.

Jack said he paints every day of the week. For the past eight years he has teamed up with two island artists, Linda and Toni Wolcott, to host a biennial trio art exhibit featuring watercolor, oil and pastel pieces.

Linda and Toni are sisters-in-law. Jack met them through Linda’s mother, Susie.

The first show was held at Susie’s home, and the last two shows were held at the art center.

“Linda was re-affiliating herself with Boca Grande, and we started talking at an art show – they are always very social – and we talked about possibly starting a show of our own,” Jack said.

The trio art show is this weekend at the Boca Grande Art Center, located at 236 Banyan St. on the island.

“It’s a small show, and it allows the artists to show several pieces of their work,” Jack said.

There will be about 15 pieces of Jack’s art at the show.

Jack also hosts a show in Richmond every year.

Jack and Kathy have six granddaughters, all of whom live in Virginia. Their oldest granddaughter, Brittany, attends Virginia Commonwealth University and is studying art.

For many years, Jack and Kathy had a beloved Golden Retriever named “Gracie Good Girl Sweetie Pie Golden Bear.” They got her as a puppy. “Gracie was a tiny little thing – the runt of the litter – that’s how she got her name – she came to us by the Grace of God,” Jack said.