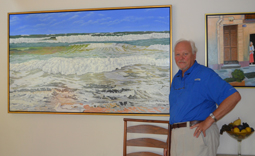 Bob Vorel managed several successful career endeavors before choosing to settle down in Boca Grande. He and his wife, Annie, came to the island by boat 10 years ago. They purchased a tug trawler in Milwaukee and navigated up through Canada and Lake Ontario, travelling on several canals that eventually led them to Florida. The journey covered about 6,000 nautical miles.

“It was a long trip. I was proud of Annie for being such a good sport about it. She did wonderfully. It was a gorgeous boat, a very comfortable boat to travel such a long distance in,” Bob said.

They were intrigued with Boca Grande after reading about the island in a book. They soon started spending time vacationing here every year.

About 8 years ago, they made Boca Grande their permanent home. They are here about ten months out of the year.

“We travel to Maine in August and September to get away

from the heat,” he said. “We also enjoy visiting friends in Shepherdstown, West Virginia.”

Bob attended the University of Illinois and graduated with a degree in graphic design. He worked as a photographer for several years after graduating.

“I couldn’t wait to get out of the Midwest, so I went east and ended up getting a job in a boatyard as a boat carpenter,” Bob said.

That gave him a good foundation for learning to become a marine surveyor, inspecting boats, ships and cargo in Massachusetts.

“It’s a very rare trade, and there are not many people who specialize in it. When I chose to stop working in the field, my customers asked me if I could still travel to give them estimates. They even asked me if I would open a new office in Chicago. It was a very interesting job,” Bob said.

From there he worked with insurance companies inspecting yachts and larger ships traveling from Nova Scotia all the way to the Gulf of Mexico, where he helped launch oil rigs.

But several years later, he realized how much he missed the peace and quiet of living in the country.

He decided to relocate to northwestern West Virginia, where he found a job in woodworking as a craftsman.

“I made furniture and other things like forks and rakes, and almost all of it was done by hand,” he said.

Then he started to grow tired of working with his hands. He wanted do something that was less physical and required more mental labor.

He had always loved music, especially blues music, so in 1990 he decided to start a magazine that focused totally on the genre. He recalled that when he was a kid, he’d sit in his basement and listen to music instead of doing his homework. It inspired him to learn how to play the guitar.

He got in touch with several musicians and put together a solid team of content contributors, editors and sales consultants.

“It started as a small tabloid, and it grew bigger and bigger with every issue to the point where, after two years, it was in full color. About four years later we were the largest-circulation blues publication in the world,” he said.

Bob said there is a very strong interest globally in blues music, and the publication quickly spread from the United States to Europe.

It went from a quarterly edition to bimonthly and then to 10 issues a year.

“It still has all the same writers and the same editors, from what I understand,” he said.

Bob has one very special memory from the time  he was working on a story for the magazine. He traveled to Memphis to interview folks-blues singer Maria Muldar, and she suggested that they stop at Al Green’s church and then get some superior Memphis barbeque for lunch.

“I remember it like it was yesterday. He (Al Green) walked down the aisle in the church singing ‘Amazing Grace,’ and it was just surreal. He was truly singing from his heart – it was so moving. That was probably one of the most fabulous days I ever experienced,” he said.

Another one of Bob’s hobbies when he lived in West Virginia was to do Revolutionary War re-enactments with friends.

“It was a lot of fun. We would camp outside with like-minded people, dress in period costumes and shoot black powder,” he said.

Bob is an avid reader. Rows of paperbacks and hardcover books line the shelves in his home.

“They know me by my first name at the library,” he said.

One of his favorite books is “The River of Doubt,” a book about Theodore Roosevelt’s dark trip down the Amazon, written by Candice Millard.

“That was just a fascinating, fabulous book,” Bob said.

He also has many favorite movies. A few include “Gladiator,” “The African Queen” and “Captains Courageous.”

Bob and Annie enjoy watching the television show NCIS. He recently became a fan of “Mozart In the Jungle,” a show available on Amazon Prime.

“It is really well acted and put together very well,” Bob said.

While listening to blues is still one of his favorite pastimes, he says he enjoys music of all kinds.

He and Annie like to travel whenever they have the chance.

Bob was a plein air painter up north and is currently an oil painter. His home studio is filled with paintings and sculptures from his college days. He also still enjoys photography.

He credits the success of many of his paintings to art classes that he took in school.

Bob usually takes a breather from painting during the summer months, when he spends time visiting family and friends up north.

Bob was a featured artist at the Art in Bloom 2016 Spring Show. One of his creations on display was entitled: “Lobsta’s In There,” which was inspired by a photo taken in Maine. He does about three shows at the Art Center each year. He has also done several informal shows up north.

Annie is a passionate photographer. Like Bob’s paintings, her work is proudly framed and displayed throughout their home.

Bob and Annie look forward to visiting Shepherdstown every summer. He said it is one of the most picturesque places he has ever lived in.

“West Virginia has some of the most beautiful countryside views of anywhere that I have traveled to. It’s like there is an ever-changing window of paintings from every view.”