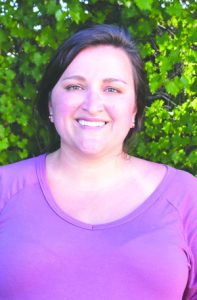 BY SUSAN ERWIN – Becky Hunt is passionate about pursuing her goals in life, and that diligent trait has clearly been passed along to her daughter, Evie, who has been The Island School reporter for the Boca Beacon since last fall.

Becky was born in Clermont, Florida, a town just west of Orlando.

“My parents moved there in 1977,” she said. “My dad is originally from Miami, and my mom is from southern Indiana.”

She is one of three girls, and she also has one brother. All of them were born at home with the help of a midwife.

“My parents were kind of hippies,” she said with a laugh. “We’re a very close family.”

Clermont is a very large orange grove town, and as a child she spent a lot of time at an observation tower known as the Florida Citrus Tower, where people could go to see citrus groves and also the area known as “Chain of Lakes.” The tower is a 226-foot-tall structure (equivalent to 22 stories) built in 1956. It allows visitors to observe miles and miles of orange groves, and it was once among the most famous landmarks of the Orlando area. The glass-enclosed observation deck allows visitors to enjoy the panoramic view of the rolling hills of Florida’s ridge section and hundreds of spring-fed lakes in the surrounding 8-county area.

“It’s really a very interesting attraction to check out if you’ve never been there,” Becky said.

Her first job was at a citrus stand, selling orange juice, when she was 15 years old.

“It was a neat little place to grow up, and we were only 20 minutes to Disney World. It was close to a lot of places in Orlando. There was always something fun to do.”

After graduating from high school, Becky worked for a construction company for about a year. One of the women she worked with told her she would make a great teacher, so she decided to attend the University of Central Florida and earned her undergraduate degree majoring in history and political science. She went on to pursue her master’s degree in curriculum and instruction at the University of Florida in Gainesville.

After graduating, she worked at a school in northern Lake County and taught 12th grade economics for three years. Then she worked at the district office, specializing in advanced academics and placement programs. Soon she was offered a position with the Orange County School District.

“It is the ninth-largest school district in the country, so they offered more programs like the international baccalaureate and various curricula for gifted students,” she said.

She met her husband Bill when they were teenagers, but they didn’t begin dating until a few years later, when

they bumped into each other while attending a concert in Orlando. They dated for six months and were married six months later … and six months after that Becky became pregnant with Evie.

Evie is now 10 and a fifth grader at The Island School. She’s a confident young student who stepped into the Boca Beacon office one afternoon last September, expressing a desire to contribute to the newspaper. Over the past seven months, Evie has produced many stories and photographs for the school page of the newspaper, and she has also written an opinion piece about being a new student and living in Boca Grande.

“I tried to teach her at a very young age that if you want to succeed in life, you have to work hard and aim high,” Becky said.

Bill is in the electrical wholesale business. He sells wiring and lighting for commercial and residential construction companies and contractors.

Evie explains it to her friends at school by saying her dad sells light bulbs, Becky said.

Last summer Bill was transferred to Charlotte County through his company, and that’s how the family ended up in Boca Grande.

“We were looking for a change, so when the opportunity became available we went after it.”

Bill and Evie moved here last August, and Becky joined them in September when she accepted a job at Heron Creek Middle School in North Port.

Becky’s dad lived in Cape Coral at one point, which is how she and Bill became familiar with Boca Grande.

“We liked the island so much, we would come here during the summer every other weekend. We love it … it’s like paradise here.”

“Middle school can be tough for many kids; it’s a difficult age, and they’re going through a lot of changes,” she said.

The Hunt family lived at the north end of the island until recently, when they found a home in Venice.

The busy teacher, wife and mother is currently pursuing her doctorate degree at the University of Miami in Coral Gables. She commutes to the school once per month to take classes on Fridays, Saturdays and Sundays for the full-time program.

She just finished the first year of the program and has two years left until completion. Her Ph.D will be in higher education administration. She would like to eventually work for a university.

“In the future, I am looking into branching out from the K through 12 classrooms and pursuing a career in education at a higher level.”

Before taking the teaching position at Heron Creek, she previously worked for the district office for Orange County Schools in downtown Orlando. She ran the advanced academics department, including college preparedness programs and college recruitment events.

Becky said Evie wants to become president of the nation one day – and to those of you who know her, that should come as no surprise. The plan is for Evie to attend Pine View School for the Gifted in the fall. It’s a public, college-preparatory, coeducational school located in Osprey, Florida.

Becky’s professional goal in five years is to become a dean at a college or university.

“I’ve actually really enjoyed being in college, because I’ve always loved learning, so I would like to be a part of providing that experience for other people,” Becky said.

She was definitely a nontraditional student. After high school, she worked for a year and then went to college, and had Evie during her third year of college. She would drive back and forth from Orlando to Gainesville to finish school while her sister and her mom would help watch Evie.

“And if I can do it, I think that demonstrates that others can do it as well.”

When she is not working, Becky enjoys spening time on the beach, fishing, reading, photography and traveling with family.

“We are like the Three Musketeers … Evie is our little buddy, and we enjoy going everywhere and exploring new places together.”