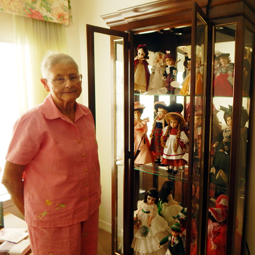 Ask a few Boca Grande native millennials if they know Zelma Otto, and they might respond with a smile as they reflect back on their years spent growing up on the island while she cared for them after school.

Zelma was a babysitter on the island for several decades and watched over the O’Bannon children, the Stewarts, the Bakers, the Newlins and the Stockes, just to name a few. She grew up in Boca Grande and attended grade school here. Her family lived on Tarpon Street, or “Whitewash Alley,” as she refers to it.

“My father used to be the harbormaster, and when the big ships would come in, he’d take us down to the docks and let us explore the ships. I remember walking out to the plank and looking down into that deep, dark water,” she said.

She was one of six children – five girls and one boy – in the family, which moved to Orlando in 1942.

“World War II was well underway, so that’s why we moved – there wasn’t enough work on the island,” she said.

Her dad found contract work in Orlando as an electrician. Her two older sisters got married and moved to New York and Kansas, leaving Zelma to take care of the household as her father looked for more work. Zelma graduated from high school in Longwood, a town near Orlando.

“I used to know every street name in that town. Now that area has grown by leaps and bounds, and I’d get lost if I went there,” she said.

She remembers coming back to the island to spend the weekends here before I-75 was built.

“My aunt married a man from Boca Grande, and her children stayed and lived on the island.” After graduating from high school, she worked in a dental office and was trained directly by the dentist who owned the practice.

She worked in the dental field for the next 30 years.

“There weren’t any training programs offered by schools like there are today. You learned everything from the doctor you worked for,” she said.

After high school, Zelma met her husband, George, who served in the U.S. Navy and then worked as a draftsman.

They had three children together: Craig, who served for 23 years in the U.S. Air Force; Debbie, a registered nurse and case manager; and Glenn, a civil engineer. All three kids worked their way through college, which made Zelma and George very proud.

Always a busy lady, Zelma worked for the same dentist for 20 years while raising her children. George was originally from New Jersey, and he decided at one point that he wanted to move back up north. So the Otto family moved to New Jersey to be closer to his family. Their youngest son was three at that time. They lived there for 11 years.

“I had to learn how to drive in the snow in a station wagon without a heater in it – and it was a wicked winter, that first one,” she said. Zelma continued working in the dental field in New Jersey, but she didn’t feel a positive rapport with the dentist she was working with at that time, so she left and accepted a job in electronics with a company that manufactured the filaments that go inside light bulbs. She also learned how to make transistors.

“I liked the job, it was nice, clean work. Everything was done under microscopes, and we wore gloves while putting the pieces together.” She ended up as a supervisor for that company, training new employees.

Missing the warm and sunny weather, the family moved back to Longwood when her daughter was a senior in high school. After choosing to retire, Zelma and George looked at properties from Englewood to Naples for their retirement home.

They liked the Gulf Cove area and purchased a residential lot there with the intention of building a home. But they ended up buying an existing home in Rotonda, where they lived for 27 years. Zelma went back to babysitting – a job she first began when she was 10 years old – because she enjoyed it so much and also to supplement her income. “I think I actually felt guilty about working all those years as my children were growing up. I felt like I missed out on spending time with them, and it made me feel better by taking care of those young children,” she said.

Zelma worked in various retail stores both on and off the island when she started babysitting at night. She also worked as a nanny for one family that spent winters in Boca Grande, and she even traveled to Chicago to stay with the children when the parents went to England. Her first babysitting job was for an island doctor who worked the winter months in Boca Grande. She would watch his two children every day after school.

“I think I’ve cared for children in nearly every condo and home on the island,” she said. “Some of the people came at the same time every year, so I could plan my schedule around theirs. Many of the parents just needed someone to watch their children for a couple of hours after school, so they would drop them off at the house I was sitting at, and the children would all play together.”

Many of the families still send her pictures and Christmas cards every year to keep in touch. Zelma recalls telling the children stories about what the island was like when she grew up. She would explain to them how she used to make her own toys from wood, shells and other things she’d find on the island. And she’d explain how lucky she was to get one present for Christmas. She would tell them about how excited people would be to see the train come in every morning from Tampa and watch the passengers get dropped of and picked up.

She recalls that life on the island was pretty carefree for children in those days. Their days were spent swimming at the beach and exploring the island. “I was fortunate that my father encouraged us all to discover and learn about new things,” she said.

After her husband became ill, Zelma was his caretaker until he passed away at Tidewell Hospice. They were married for 62 years. And although she loved the house in Rotonda, it was becoming too much to take care of, so she moved into a smaller apartment in Rotonda Lakes in 2015.

Today, Zelma has six grandchildren and 7 great-grandchildren. She enjoys going for walks every day and meeting new neighbors. She likes yard work and spending time outdoors planting hibiscus and other kinds of flowers. She remains active with her church, and she’s also a volunteer for Tidewell Hospice as well as Englewood Helping Hand.

Her apartment is decorated with beautiful paintings and shelves filled with photos of family and friends. She has a remarkable porcelain doll collection, including a few from Europe. She’s currently looking to possibly sell the collection on consignment.

Zelma recently celebrated her 90th birthday with family and friends at her apartment. She said her friend Mary O’Bannon kindly offered her home on the island for Zelma’s family to stay in, so the occasion also turned into a joyous family reunion. “We had such a nice time. Mary is one of the kindest, most generous people I know,” Zelma said.