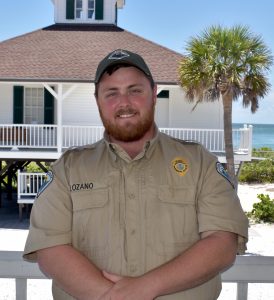 Zachary Lozano is the new Gasparilla Island State Park manager, but he is certainly not new to Boca Grande. Zac worked at the park several years ago before advancing his career in several other parks around the state.

He held that position for a year and was promoted again to assistant park manager at Sebastian Inlet State Park at Indian River Lagoon Preserve on the east coast of Florida.

“I wanted to learn more and advance in my career, so I accepted that position,” he said. “Half the park was in Brevard County and the other was in Indian River County near the town of Melbourne,” he said.

Being the assistant park manager, he oversaw the field operations and learned the necessary skills to be promoted to the next level.

“Sebastian Inlet State Park had a huge campground, and they were open 24 hours a day. They had two ranger stations with staff at both locations,” he said.

The park had two museums, a full-service marina, a full- service and a primitive campground, two large fishing piers and a concession building near the water.

Zac was there for two years, living onsite at the park.

“It was a huge operation, and I learned many of the skills that enabled me to get another promotion and advance my career.”

He was promoted again to park manager at Delnor-Wiggins Pass State Park in Naples.

After working for a year in Naples, the parks manager position opened up here in Boca Grande.

Zac is originally from, Layton, Florida, a city on the island of Long Key in Monroe County.

“It’s so small that you can drive in and out of it in just a few minutes,” he said.

His parents, Ray and Sandra Lozano, moved to Punta Gorda with their sons in 1999, so Zac became familiar with Charlotte Harbor very quickly.

Ray was a commercial fisherman in the Keys, which is where Zac learned his appreciation for nature.

“He caught lobster and stone crabs, and we lived less than a half-mile from Long Key State Park, where I spent a lot of time growing up … so I always had a passion for parks.”

In 1998, Hurricane George wiped out his dad’s commercial crabbing business, and the family decided to move to Punta Gorda.

When an opportunity arose to work for the parks system at Cayo Costa State Park, he decided to pursue a career as a ranger.

His mom was originally from New Jersey, and his dad was from Miami. Sandra’s sister was living in the Florida Keys on the same street as Ray, and that is how they met.

“They instilled strong values in me, which contributed to my striving for a successful career.”

Zac has one older brother, Aaron, who is a family physician in the northeast Tampa area. His uncle is a retired ear, nose and throat doctor.

Growing up in Charlotte Harbor and working at local parks made the transition to his current position a natural fit.

“With my experience it just made sense that it would be a seamless transition between management and staff, and I have a real passion for these parks. I really enjoy them and understand the intricacies and the background.”

As a former park specialist here, he worked closely with the Barrier Island Parks Society and has a good working relationship with Sharon McKenzie, executive director for the organization.

“Barrier Island Parks Society is amazing – it’s a very successful, strong organization … I am very excited to be back working with them,” Zac said.

He noted that the park manager role is unique, and running Gasparilla State Park is just one part of the job. He attends meetings regularly at the three other parks.

Stump Pass State Park is in the process of starting up a “Friends” group, which is a citizen support group that works together to maintain the park as well as update the amenities available.

“It’s still in the early stages, but there is a lot of interest, so we are hoping that more volunteers are willing to commit to leadership roles.”

His duties as park manager vary from day to day, depending on the types of projects that need to be completed.

“Each day is different, and that’s what keeps it exciting.”

He also works to secure grants for various projects that need funding.

Zac is also the FWC permit holder for the sea turtle nesting season.

“So right now we are focused on getting back to a full staff and getting our regular operations running like they should, and then I’ll be able to devote more time to some of the issues that have been waiting for attention. My job is to make sure the park provides a great outdoor experience for folks.”

“We commuted from coast to coast until the position in Naples opened up, and then I moved there so we could be closer,” Zac said. “She really enjoys her job at that park, so this has worked out just great.”

Zac and Taylor live at the south end of the island. They have two dogs that they walk every evening. One is a Lab named Drake, and one is a little mixed mutt named Rider.

“I like living close to the park, because I feel I can stay connected to what’s going on all the time,” he said.

When he is not working, Zac enjoys fishing, backpacking, hiking and camping.

He and Taylor like to spend their free days exploring other state and national parks.

“We like going up north to experience some colder weather, and hiking in the mountains,” he said. “We spend so much of our time around the coast, we typically choose to go inland when we’re not working.”

Zac also likes to partake in competitive red fish tournaments. He enjoys fishing for tarpon but has not competed in any recent tournaments.

Zac said park staff members are crossing their fingers that 2018 will be an uneventful hurricane season, so they can use the summer months to get caught up on projects.

Look for Zac and Taylor walking around the island during the evenings with their pups, Drake and Rider.