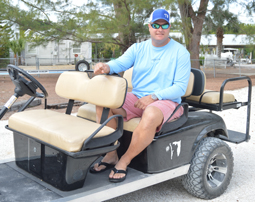 Some of William Woodroffe’s earliest memories in Boca Grande are of the exciting times he spent learning to cast a line in the water and hoping for a catch. His parents would vacation on the island every year, and this is where his father taught him how to fish.

His family also stayed on Manasota Key during the summer when William was in high school, but they always seemed to come back to Boca Grande. William grew up in Tampa, and after graduating from high school he attended the University of North Carolina at Chapel Hill, majoring in business administration. He chose the school after being recruited for a soccer scholarship.

After graduating from college he moved back to Tampa, where he worked for his cousins, who owned a smoked- meats plant.

“It worked out well. I worked Monday through Thursday, and they let me have every Friday off to interview for different jobs,” he said.

That led him to a commercial banking position with SunTrust Bank. He’s been in commercial banking since then, for nearly 15 years. He left SunTrust after two years to join Colonial Bank, and shortly thereafter helped set up a private banking institution called USAmeriBank, based out of Tampa. The company has offices in Hillsborough and Pinellas counties, and they also have some operations in Alabama.

“We started it from scratch in 2007, when I came on board, and we have grown the company from zero to $4 billion now,” William said.

He currently serves as its vice president and relationship manager. William met his wife, Liz, 15 years ago, and they’ve been married for 13 years. They have two boys: Will, 10, and Samuel, 8.

The family has been splitting their time between Tampa and Boca Grande for the past several months. They rent an apartment in town just above the Temp.

“We were very fortunate that the previous tenants were friends of ours, which is how we were able to jump on the idea of renting the apartment.”

They previously visited Boca Grande from April through June for tarpon season.

“Our connection to the island has always revolved around tarpon season,” he said. William recently helped renovate a local fishing vessel, “The Faithful II,” with Matt Coleman from Whidden’s Marina.

“It was his boat for nearly two decades. It was originally built for his father, Dickie Coleman, by the Knight brothers,” William said. It’s a wooden boat that needed renovating, so they teamed up with Matt Young and started an 18-month stem- to-stern renovation project.

“She was splashed back into the water in 2015 on her 50th anniversary,” William said. Originally built in Boca Grande, the boat is once again helping to create happy memories for passengers. William and Liz are both avid fishing enthusiasts, and they enjoy taking family and friends out on the boat as often as possible.

“Liz is actually the driving force behind it. We fish almost every night we’re here during tarpon season,” William said.

Both of the boys like to tarpon fish as well. Will has caught more than one. They are both also into hunting.

“We do a lot of deer and turkey hunting together,” William said. “We have a great place we go in Zephyrhills and also a spot in Dade City.”

“They have so much more freedom here than they do at home. We live on a fairly busy residential street, and they can’t ride their bikes around there like here, so it’s been great for them,” he said.

The boys have found a comfortable routine on the island.

“They have breakfast at The Inn’s Bakery and they have friends from The Island School. Isabella (from Whidden’s) is around their age, so they all hang around together.”

Liz was also born and raised in Tampa and worked for her family business as a food broker for years. She has since retired from that position. The couple met at the Merrymakers Club in Tampa, which William describes as a stepping-stone between a fraternity house and a country club.

“We called it the grown man’s fraternity,” he said with a laugh. The family also has a 12-year-old chocolate Labrador retriever, Kona, who often can be seen wandering into the Temp, looking her owners.

Both sides of their families live in the south Tampa area, which is where William and Liz usually spend the holidays. William’s parents recently visited the island to go tarpon fishing. “My dad still loves to fish, and my mom appreciates the sunsets more than the fishing … but she always comes along,” he said.

William was involved last year with the Red Gill Invitational on Father’s Day weekend, a new tarpon tournament that started with the help of the Whidden family. He said it was a wildly successful first year, with 22 boats registered to fish.

“The Red Gill Fish House used to be Sam Whidden’s Fish House at the marina, so we decided we wanted to name the tournament after the history there,” he said. William had a hat made which has a hashtag and silhouettes of Gasparilla Island and the state of Florida, forming an icon, “#17.”

“It’s supposed to depict Rule # 17 – which is a special rule that we have in all of our tournaments: the golden rule of respecting others and their space out on the water,” he said. William was also involved in assisting with the Boca Grande Invitational that is held in honor of Dr. Wright’s grandson, Daniel DeLaVergne.

The event helps raise money for Tampa General Hospital Foundation in honor of him. This year will mark the 8th event, and it will be held from May 10 through May 12, 2017. William was asked by the Whidden family to help the Gasparilla Island Maritime Museum by assisting with the Back Bay Tournament, which took place recently.

“I think we’re starting to see the resurgence – you could say the resurrection – of tarpon fishing in Boca Grande. It feels good, since we have resurrected ‘The Faithful,’ ” he said.

Then he added: “Although it might be considered one of the worst financial decisions we guys have ever made, at the same time it is one of the most emotionally gratifying ones we’ve ever made.”

William’s dad worked for Tampa Electric Company for 33 years as director of governmental affairs, and he entertained clients in Boca Grande for most of his career, which is how he originally came to love the island.

“I’ve gone hunting and fishing with my father my entire life. I am very thankful for all the opportunities my dad gave me and I’m trying to pass the same things on to my boys.”