William “Bill” Martin, 83, of Boca Grande and Charlevoix, Mich., passed away peacefully surrounded by his family at his home on Monday, April 10, 2017. 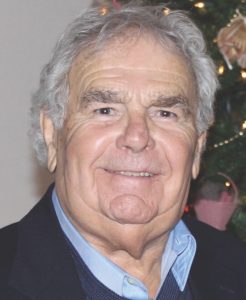 Bill was born on December 9, 1933 in Flint, Mich., the son of Clarence and Veronica Martin. He attended St Michael’s Catholic school and Central Michigan University, where he played football. He went on to graduate from Worsham College of Mortuary Science.

Bill served in the Army at Fort Lee in Petersburg, Virginia. Bill was an entrepreneur, starting his own packaging business in 1966, Compak/Webcor of Flint and Durand, Michigan. His success in business can be attributed to his work ethic and his natural mechanical ability. He developed a patent on a three in one manufacturing process which he was most proud of. Bill loved boating in Charlevoix and spending the winters in Boca Grande, Florida. He loved spending time with his family and his many friends.

A memorial celebration will be held in Charlevoix at a later date. Donations maybe made to the Leukemia and Lymphoma Society at www.lls.org.