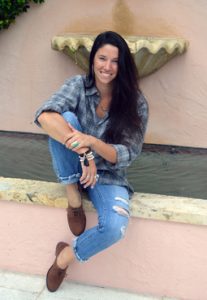 You might find her dancing, choreographing a play, longboarding the island streets, catching a wave after a storm or taking care of business at the Boca Grande Chamber of Commerce. Island locals are sure to recognize Wesley Locke’s vibrant and sparkling smile when they see her around town.

One of the precious lucky ones who get to call Boca Grande home, Wesley is the daughter of Kelly and Tommy Locke.

“I was actually born in Orlando, and then we moved here when I was about two years old. My mom grew up in Orlando and my father is from Webster, Florida,” she said. Tommy worked in construction and played college and professional baseball for a while. “He was a catcher at Florida Southern University, where he met my mom, whose brother was a pitcher on the team,” Wesley said.

Tired of dealing with the politics of baseball, Tommy decided to pursue a career as a fishing guide and began fishing all over the state, including Homosassa and the Everglades.

Soon after Wesley was born, the family moved to the tarpon capital of the world, Boca Grande.

“His specialization is fly-fishing for tarpon, and he’s been a guide here for almost 30 years. He trains anglers who are trying to pursue world records. He participates in the Golden Fly and Gold Cup fly-fishing tournaments every year,” Wesley said.

She said fly-fishing for tarpon is extremely challenging, and she loves learning everything she can from her dad. She hopes to land some world-record fish on fly together some day. Wesley said the entire family loves to fish and spend as much time on the water as possible. Wesley attended the inaugural first year at The Island School when she was in first grade.

“There were less than ten students in each grade. Karen Kelley was working at the school that first year, and she still works there. She’s on the Chamber board now, and I’m working for the Chamber … so the fact that she was my mentor at the school and now we’re working together as professional adults … it’s just wild.” Her fondest memories of growing up on the island were all of the summers she spent with her Boca tribe.

“We spent our days fishing, surfing Boca ‘waves,’ skating and golf-carting around town. We had so much fun. Mila Wyman, all the Joiners, the Spurgeon girls, Parker O’Bannon, the Bowens, Combrinks, Ariane Dumas, David Miller, Jackson Sanger, Jarrett Bottjer … and so many more – we’d be running around barefoot all over the island together, bridge jumping and pool hopping,” she said. Wesley attended L.A. Ainger Middle School and then went on to Edison Collegiate High School in Punta Gorda.

”I graduated from high school with two years of college credits, so that put me way ahead when I went to the University of Florida,” she said. She felt it was both a blessing and a bit of a curse, because when students start college with that much credit earned, you are expected to choose a major during your first semester.

Wesley started out as a large- animal veterinary major because she loved animals and science. She adores horses and even had the chance to deliver a baby foal once. “I treasured the experience, and I enjoyed my classes, but I realized I didn’t have a passion for medicine,” she said. Wesley is an avid dancer who practices everything from hip-hop and modern contemporary to salsa and ballet. She switched her major to marketing, because she felt she had a talent for it.

“I knew I wanted to dance more, so I pursued marketing because I figured if all else fails, at least I’ll be able to market myself.”

She has worked on several productions with Royal Palm Players and choreographed the productions of Godspell and Red, Hot, and Cole.

“I enjoyed working with RPP, and I look forward to doing future projects with them,” she said.

Wesley said she had a hard time in college because she missed the island very much. Switching to marketing with a minor in dance made her feel more comfortable at school. That led her to an interesting internship position.

She received a pair of Buddha pants as a gift, and she loved how comfortable they were. She did some research and found the company is based out of Miami, so she inquired via email and asked if they were interested in any interns. The owner welcomed her to come to Miami for an interview. She drove down the next day and was offered a position. Not only did she get to work with the marketing department, but she was also asked to travel and do trade shows for the company.

“I was a vendor at Wanderlust Yoga Festival, and I worked at ski resorts in Vermont and Colorado. I met fascinating people from all over the country,” she said. She still works as a contract vendor for the company, and she’ll be attending a show in London in October. “A lot of doors have opened from that internship that I never knew would have existed if I hadn’t taken a chance,” she said.

Wesley has done some volunteer work at the Chamber in the past, and she wanted to give back to the community that supported her for 20 years.

“I think we’re all drawn to the things we have a passion for, and I love Boca Grande. I actually couldn’t wait to get back to the island after college. I just want to enjoy being home, and that’s when I contacted the Chamber to see if they had any opportunities available.”

She helped with a couple of tarpon tournaments last summer and soon was offered the executive director position at the Chamber. “That totally surprised me, but I was happy to accept it,” she said. She said her goal is to make next year’s tarpon season the biggest and best ever.

“I’d like to get more sponsors and help the events grow. I will give it my best effort. This island and the community are such a gift, and it’s an honor to be in this position,” she said.

Wesley has an older sister, Sydney, and two younger brothers: Wyatt, 21 and Marshall, 15. The family has one dog, an English Crème Golden Retriever, Beau.

“He is the best, most lovable dog ever. He completes our family.”

When she is not working, Wesley enjoys a myriad of hobbies. “I enjoy visiting my sister Sydney, brother-in-law Brocke, and adorable two-year-old nephew Locke Jennings, who lovingly calls me Kaka.” She also loves singing and playing music with her brother, Wyatt. He plays piano and she plays guitar. And aside from fly-fishing, she also likes to bow-hunt whitetail deer.

“My parents are a very big inspiration to me. My dad pursued his dream of fishing and has given my family a wonderful life here. My mother is very inspiring because she encourages love, kindness and fairness above all else – they really make a great team. I hope to find a love like theirs some day,” she said.

Stop in the Chamber office (next to the Pink Pony) and say hello to Wesley. She has a wealth of knowledge when it comes to the particulars of the island.