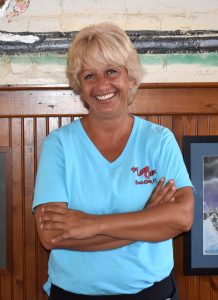 If you’ve enjoyed lunch or an ice cream at The Loose Caboose recently, you’re sure to recognize the smiling face of Tracy Roahrig.

Tracy has been working in the food and beverage service business since she was 18 years old.

“I found a job right after I graduated from high school, and I never stopped,” she said.

Before relocating to Florida from Pittsburgh in 2005, Tracy worked at what was then known as The Meadows Horse Track for more than 10 years.

She recalls that it could be a pretty wild place to work at sometimes. “The last thing people want to do when they lose money is pay their bill,” she said. “It could get pretty hostile.”

The racetrack is now also a casino and a center for major events.

Tracy was born and raised just south of Pittsburgh in a town called South Allegheny. Her family would vacation regularly in Southwest Florida.

After working for more than a decade at The Meadows, Tracy decided to give up the winters and move south.

She had a friend she visited regularly who had a timeshare at Harpoon Harry’s in Fishermen’s Village, and recalls finding this area by mistake.

“We rented a car and got really lost, and we accidentally found Englewood – and I immediately fell in love with Blind Pass Beach,” she said. “I love to look for sharks’ teeth, and it’s so beautiful there.”

So after coming to vacation here for almost 20 years, she and her son, Steven, finally made the move. “I winged it,” she said. “I’ve only moved twice in my life.” They settled in the Murdock area of Port Charlotte. “I love it there; it’s a nice, quiet area,” she said.

Tracy’s parents still live up north, and she has a sister, Chanin, who lives on the East Coast of Florida in Ormond Beach. “We are very close,” Tracy said. “She’s my best friend in the whole world.”

Tracy said her mom comes down to visit several times a year. “Our birthdays are the same day – July 27 – so we get together every year, and she’s here now.”

Tracy met her husband Mark in 2006. She was working at Mel’s Diner in Port Charlotte, and he noticed that she kept checking her cell phone every few minutes. “We had just moved here, and my son took his jet ski out to the Gulf of Mexico that day, and I was so nervous and worried about him, so I kept checking my phone,” she said. Mark, a stranger at the time, asked her what she kept looking at, and she explained the situation to him.

He must have been intrigued by Tracy, because he kept returning to the restaurant during her shift. And soon they began dating.

Mark planned a surprise wedding at Englewood Beach, unbeknownst to Tracy. Her sister was planning to visit that weekend, and Mark arranged for a friend to do the ceremony at the beach.

“I was sitting on the beach in my bathing suit, hair in a scrunchy and covered in sand, and I turn around there is our biker friend who is also a justice of the peace.” Within minutes they were married on the beach.

What Tracy didn’t know was that she had an uninvited witness at the wedding. A writer from a newspaper called  “The Mariner” was sitting close by and took a photo of the ceremony. It ran in the paper with a headline, “Caught in the act.”

She still laughs at the memories of the unexpected wedding day. ‘I was thrilled at the time, but also pretty mad at him for doing that,” she said. “That is our wedding picture … beach hair and bathing suits.”

Tracy and Mark will celebrate their 10th anniversary this year. “He’s a great man; he has a very good soul.”

They live in Port Charlotte with their rescue mutt dog, Cooper. The story of Cooper is also an interesting tale. Mark told Tracy they were going shopping in town around Christmas time.

“I thought I was finally going to get my Le Vian chocolate diamond, so I was all dressed up, makeup and hair done.”

To her surprise, Mark drove to an animal rescue center in Port Charlotte. The workers at the shelter were a bit surprised to see Tracy, dressed to the nines, walk into the shelter.

“But then I saw Cooper, and that was it,” she said. “We took him home that afternoon.”

Over the years, Tracy has worked in the restaurant at Riverwood Golf Club in Port Charlotte and in a few other local establishments.

After she left Riverwood, she took a position as a supervisor at Heritage Palms in Fort Myers. She also has worked at Gulf View Grille in Englewood for several years, which is now The Waverly Restaurant and Bar.

“They were all nice places to work, and I made really good friends at each place,” she said.

She was working at Gulf View Grille when a friend, Patricia, who also works at The Loose Caboose, mentioned there was an opening in Boca Grande. She applied and was offered the position at “The Loose” in December of 2017.

“I love it here, and right now my schedule is great, because I’ve worked nights for so many years,” she said. “And even in season we close at 9 p.m., so the hours go by quickly.”

Tracy said her favorite part about working in Boca Grande is the people. “I’ve met some very nice new friends, and I love the fact that people can bring their dogs here for lunch.”

When Tracy is not working, you can find her on the beach searching for sharks’ teeth and shells.

She places the sharks’ teeth in clear vases and gives them away as gifts.

She and her husband used to ride motorcycles, but after Mark experienced an injury from riding, they gave it up.

Boating is not a fun activity for Tracy. She refers to herself as a “chummer.”

“I’ve gotten really seasick on every boat I’ve ever gone out on; I end up feeding the fish,” she said with a laugh. “My husband likes to fish and we have a boat, but I am a lover of the land.”

She is a fan of “Erté Deco” and enjoys adding new pieces throughout her home.

Tracy and Mark recently purchased a travel trailer and have been exploring the state and visiting different campgrounds.

“Flagler Beach is very nice, and it’s also very dog-friendly, so we like to go there.”

During Hurricane Irma, they fled to Tennessee with Cooper.

“My son lives less than two miles away, so I get to see them all the time. Lilly is an amazing kid. She’s kind, courteous and sweet.”

Tracy’s genuine personality shines bright, and she always seems to have a smile on her face.

Her philosophy of life is, “For every minute you are angry you lose 60 seconds of happiness.”

The Loose Caboose now offers specialty cocktails. Stop by and enjoy an “All-American Lemonade” (Tito’s vodka and lemonade) or one of the other signature drinks and have this friendly bartender serve it with a smile.