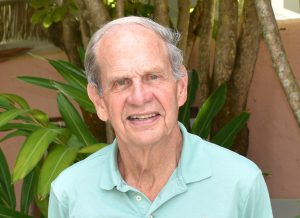 Tom Wilcox has been promoting growth and high performance in nonprofit organizations for 50 years, 42 of them as a CEO. Although he’s still doing some consulting for a few organizations, he spends much of his time sailing, playing tennis at Boca Bay Pass Club and swinging his clubs at Lemon Bay Golf Club.

His mother was a photographer who took cover photos for Time and Newsweek, and his father was a physician.

After graduating from high school, he attended Colorado College and studied political science.

“I wanted to do something different and to see another part of the country,” he said.

After he earned a bachelor’s degree, he taught in Colorado and was offered an opportunity to teach in Switzerland and Italy. It was an American School, and he taught at two campuses – a high school and junior college – taking a train back and forth between the two schools each week. He had to learn to speak Italian and French at that time. He had studied French, and he said Italian came pretty easily.

“I was young and single and I wanted to travel, so I quickly accepted the opportunity,” Tom said. “I claim that I stutter in three different languages,” he said, making fun of a severe speech disorder he had as a child, which still pops up from time to time.

His mother told him that God gave him a stutter so the rest of the world couldn’t get a word in edgewise.

He returned to Connecticut two years later to teach at Wooster High School, and he earned a master’s degree in education and business at Harvard University.

“Shortly into my teaching career I figured out that I was more interested in larger policy questions that affected kids, and how institutions were structured,” Tom said.

In 1976, Tom founded The Association of Boarding Schools (TABS), reversing a 15 percent enrollment decline in the wake of the turbulent 1960s and 1970s, and setting the stage for unprecedented growth in an industry redefined by its commitment to diversity and excellence.

“Many people lost interest in boarding schools during the 1970s – everything was changing and the schools were traditional and quite stuffy, so enrollments went way down. It occurred to me that we were all competing for students, so I visited the directors of admissions at various schools around the country and asked if they were interested in working together to save the schools.”

The goals were to diversify the schools and make them open to all. The enrollments came back and more multicultural and international students were being recruited, proving Tom’s efforts to be successful.

As headmaster of Concord Academy from 1981 to 2000, Tom demonstrated that a former girls’ school could successfully compete with the oldest, wealthiest and most exclusive former male secondary schools in the nation. Working with a dynamic and committed board and a gifted faculty, Tom transformed the campus and built the annual fund from less than $100,000 to more than $1,500,000, the endowment from less than $1,000,000 to more than $35,000,000, the admission pool from fewer than 200 to more than 900 applicants for 90 openings, and minority enrollment from five to 30 percent.

While at Concord, Tom recreated and led the Institute for New Headmasters for the National Association of Independent Schools, focusing on intellectual leadership of an academic institution, managerial leadership of a complex business enterprise and personal leadership of a dynamic human community. Tom spent a 1997-98 sabbatical from Concord Academy as visiting advisor at The David and Lucile Packard Foundation, working with the family and staff in the wake of Mr. Packard’s death as the corpus grew from $1 to $9 billion.

As president of The Baltimore Community Foundation (BCF) from 2000 to 2018, Tom increased annual grant-making from an average of less than $5,000,000 to more than $25,000,000 per year while establishing ground- breaking collective-impact initiatives in education, neighborhood development, public transportation and environmental sustainability.

“I was very lucky … life gave me a lot of good breaks.”

Tom met his wife, Whitney “Whitty” Ransome, while they were both working at Concord Academy. Whitty was also a teacher and an administrator and the co-founder of The National Coalition of Girls Schools.

“That’s a combination of about 200 girls’ schools across the county that were struggling, and she helped resurrect them.”

Tom and Whitty have two grown children: Kate and Christopher.

Kate lives in New Orleans and is an assistant film director. Christopher lives in Seattle and works with the homeless population, making sure they are able to find shelter, food and other necessary resources.

“They’re both great kids, and we’re really proud of them.”

Tom has been coming to Boca Grande for 40 years – Whitty even longer. As newlyweds, they came down to spend Christmas with her family. Whitty’s father and grandfather had been coming to the island for years to fish, and the family always spent the holidays on the island.

“Every year we would come for Christmas and then for 10 days in the spring,” he said. “We really enjoyed sports and being outside in the beautiful weather.”

After he left Concord Academy, author and teacher Philip McFarland published and dedicated a book to Tom and Whitty called “A History of Concord Academy: The Wilcox Years.” The book is filled with facts, photos and statistics about the academy from 1981 though 2000.

Since then, he’s been able to enjoy even more social activities in Boca Grande. He joined Grande Glee a year ago and has been taking voice lessons with Sharon Ponte.

“I’ve gotten so much better, thanks to her,” he said.

Grande Glee will be performing “Joseph and the Amazing Technicolor Dreamcoat” at the Boca Grande United Methodist Church from April 2 through April 4. Keep reading the Boca Beacon for updates.

Tom plays tennis matches every Monday night at the Boca Bay Pass Club, but he admits he is usually the “goat” and rarely the “kingbird.”

Tom and Whitty went on a group trip to the Everglades with the Friends of Boca Grande two years ago, and they went to France with the group last year.

“We’ve made so many friends on those trips, and we still get together with them.”

“It’s a beautiful course, and the Audubon society has recognized it as an ecologically important place,” Tom said. “It’s like being in a sanctuary while you’re playing golf.”

Tom competed in his first triathlon when he was 65.

Tom and Whitty spend the summer months on a lake in Quebec. His grandfather bought the place in 1901, and you can only get there via boat.

“There’s no road or electricity, but it now has hot running water. It’s really beautiful up there.”

Tom spearheaded a conservation trust to save 1,200 acres of land in Quebec and turn it into a preserve.

“It’s such pristine, wonderful land,” he said. “There are 15 miles of trails for the public to enjoy, and there are trustees that we will pass the deeds on to so the land will always be protected.”

Here in Boca Grande, Tom shares a sailboat with two other guys, and they keep it at Whidden’s Marina. He also shares a motorboat that is kept at The Inn Marina.

To fight aging, Tom swims, bikes and runs daily. He also believes it’s important to keep the brain stimulated, so he tries to catch as many lectures and presentations at the Community Center as possible,

“You have to keep reading, thinking and moving to stay sharp,” he said. “And there are so many activities offered in Boca Grande, there’s no reason not to get involved and stay active.”