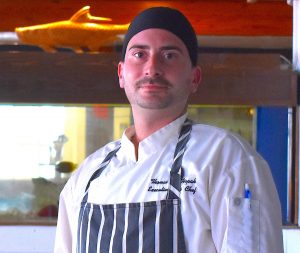 Tom Tirpak has been in the restaurant business since he was 16 years old. He grew up in Philadelphia, Pa. and attended high school in New Jersey. After he graduated, he earned an associate of science degree in culinary arts at The Restaurant School at Walnut Hill College in Philadelphia.

“I went back and forth in my younger years, but I mostly practiced my culinary skills in Philadelphia,” Tom said.

He knew from a very young age that he wanted to be a chef.

“It’s where I feel most at home,” he said. “I remember grilling outdoors with my dad on the weekends and
thinking that is what I want to do. When people asked me what I wanted to do for a career, I always told them I wanted to be a chef.”

Some of the courses he took in school included restaurant management as well as hands-on front of the house and back of the house training.

“We had protein classes, sauce classes … they broke it down by basic categories,” he said.

His first job in the restaurant business was at an Italian place in Philadelphia called Frederick’s Italian Cuisine. He started out as a prep cook and learned the business from the ground up.

“I remember making gnocchi and fresh pasta – it was like a true old-school Italian joint,” he said. “It was family- owned and very popular.”

Tom is the executive sous chef at Scarpa’s Coastal Italian Restaurant in Boca Grande. He started working for Ashley and Glenn Scarpa in March. Before that he worked at The Gasparilla Inn for about two years, where he was the lead line chef.

“I started out as a prep cook there, and I really learned a lot of new skills,” Tom said.

Tom actually helped prep Scarpa’s Coastal by painting and doing some light maintenance on the property after the owners announced the new establishment would have a soft opening last May. After careful planning and months of scouting, Scarpa’s Coastal was born in May of this year. The restaurant expands on the idea of fresh Florida seafood with an Italian flair that has become synonymous with Scarpa’s name. The owners have run a successful restaurant in Lakeland for many years, and it still exists, thanks to good help and efficient management.

Tom tries to create food that resembles little pieces of art. He likes to take something simple, like a BLT, and use really high-quality bacon and heirloom tomatoes and season them to perfection.

“I like to see what I can do with every single ingredient to make something so composed that the customer remembers the experience,” he said.

He worked in Philadelphia for about seven years and then moved to Erie, Pennsylvania, where he worked at a Sheraton resort and hotel as a line cook. He eventually worked his way up to head chef after six years.

“It was a very good work environment, and I really learned a lot over the years.”

When it comes to cooking, Tom is classically French-trained and works under the brigade system. Brigade de cuisine is a system of hierarchy found in restaurants and hotels employing extensive staff, commonly referred to as “kitchen staff” in English-speaking countries. This structured team system delegates responsibilities to different individuals who specialize in certain tasks in the kitchen.

“As of right now, it’s just Glenn and me, and then a buddy of mine from The Gasparilla Inn who is going to start doing breakfasts here soon, Kevin Shakespeare. He started with us on day one. He’s my right-hand man.”

Tom said he is ready for season to begin, and he’s looking to hire more staff for the kitchen, so if you’re looking for a job, stop in and talk to him.

During season, he will oversee about nine people between the breakfast and dinner shifts.

“The kitchen here is not very large, but it’s big enough to accommodate busy nights. We can turn things over pretty quickly. It’s actually pretty extraordinary,” he said.

Tom begins his days during the early afternoon hours, making pasta and sauces and trying out new dishes for the owners and staff to taste and recommend. He maintains an efficient and organized environment so the kitchen staff can execute large orders. He expects to serve between 150 and 200 customers on weekends during season, and probably around 100 on the weekdays, so the kitchen will be hopping.

When he first moved to Florida fours year ago with his fiancé, Tiara Triana, Tom worked at The Beach House restaurant on Anna Maria Island. They lived in Bradenton for a year before they moved to North Port. Tiara is originally from Florida, and the two met at a mutual friend’s party in Erie, Pennsylvania seven years ago.

“She was living with her mom there, and she really didn’t have any plans to move back — but I’ve always wanted to be a chef and live in the south, so now I’ve accomplished those goals.”

For motivation, he even placed a fake palm tree in his house up north for years, to inspire him to reach for his dreams.

He doesn’t miss the snow. The last winter he lived up north there were several feet of snow, and the temperature hit minus-30 degrees.

Tom discovered Boca Grande when he found a “help wanted” advertisement on an employment website. He actually applied for a sous chef position and was offered a prep cook position. At the time, he didn’t realize the executive chef there was competing in international food competitions.

Since then he’s been trying to find a balance between fine dining and upscale casual.

“I want people to relax and enjoy themselves and have a good time,” he said.

Tom said Scarpa’s Coastal is in the process of developing a bar menu which is going to include flat breads and possibly short ribs, as well as a variety of other appetizers. The expanded new bar area will include several more tables and chairs. The old patio area has been enclosed, allowing for a much larger bar than the previous restaurant provided.

Tom said he loves working in Boca Grande, especially so close to the beach. He said that when he met the owners during the interview process, he knew it would be a good match.

“Being at the restaurant from the start, I really feel one with this place,” he said. “The owners are wonderful people, and the customers are some of the kindest people I’ve ever met.”

Tom worked with Todd Hampton, the bartender at Scarpa’s’ Coastal, who also started at the restaurant from day one. They worked together at the Pink Elephant for a season.

“I’ve come along way … from cooking in the alleyways of Philadelphia to cooking near the palm trees in Florida,” he said.

When h e is not working, Tom enjoys kayaking, reading and being the host at family barbecues. He also enjoys spending time with his 14-year- old stepdaughter, Alicia. The family has one dog, Bear, and a cat named Captain.

He’s gone out fishing with Glenn several times and recently caught a redfish from the harbor.

Tom is happy to offer “hook and cook” meals at Scarpa’s Coastal. You can bring your fresh, cleaned catch to the restaurant and tell him just how you want it prepared. And it’s not just fish that he’ll cook for you. Last year a group of customers brought in seven pounds of cleaned alligator meat, and he sautéed it, blackened it and fried it for his guests. Of course, he had to try some and said it was delicious.

A few of Tom’s signature dishes at the restaurant include roasted red pepper pasta, spinach linguine and a variety of seafood entrees.