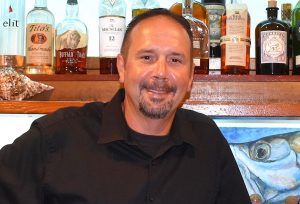 Todd Hampton may have spent much of his life in Winter Haven, Florida, but he’s been coming to Boca Grande for almost than 30 years.

Todd is the friendly face behind the bar inside Scarpa’s Coastal Restaurant on the island.

He started prepping for the soft opening in April, and the restaurant opened in May.

“It’s nice to be a part of something new,” Todd said. “Ashley and Glenn are great and it feels like we’re all family here.”

Before working at Scarpa’s, he was a bartender at The Gasparilla Inn for two years. On slow days, he would offer to give guests tours at The Inn, personally walking around the hotel and talking about the history, which was a smart marketing idea as many of the guests would head back to BZs gathering place at The Inn to order cocktails.

He said he is enjoying his new job at Scarpa’s because he gets to see many regular customers he’s met over the years. He recalls it was difficult to anticipate how busy he would be on any given day at The Inn, because weddings and special events would bring additional people to the establishment.

“It was exciting but also challenging … sometimes I wouldn’t have a single person in the bar for an hour and then 150 would come in for drinks.”

Todd is very particular about his work, and he keeps a very traditional, organized bar. He makes true “Old Fashioned” cocktails using a fresh cherry, a sugar cube, two to three dashes of bitters and top-shelf bourbon. He also makes signature drinks like fruit-infused pitchers filled with fresh fruits mixed with flavored vodkas.

And he always has a smile on his face.

“It goes with the job,” he said. “Bartending is one of the oldest professions, and I’m here to help make my customers happy. I understand when someone comes into the bar after having a bad day, and it’s my job to make sure people have smiles on their faces by the time they leave.”

The bar at Scarpa’s looks very similar to what it looked like back when it was PJ’s Seagrille, with the exception of a few booths being removed and open seating added where they existed. A fresh coat of paint and some new wallpaper gave the place a renewed appearance. And of course the famous aquarium filled with the same colorful and curious fish is still there, too.

Todd said his favorite part of coming to work in Boca Grande is crossing the three bridges and looking at the water each day.

“It just puts a smile on my face.”
He said many of the clients who dine at Scarpa’s travel here from Lakeland because they vacation on the island.

The owners are in the process of expanding the bar area in the near future at the back of the restaurant. It will extend further where the patio tables exist now. Once it gets expanded, Todd will have additional to help run the bar smoothly. He’ll also be stocking a wider variety of liquors when the new bar is up and running.

The restaurant currently seats 160 people with about a capacity of 20 in the bar area.

It’s a serendipitous story how Todd met Ashley and Glenn. They were here to check out the property at PJs Seagrille when it was for sale last summer, and they stopped in to have cocktails at The Inn.

“I noticed the name on the credit card and asked them if they knew of Scarpa’s Italian Restaurant in Lakeland – which I was very familiar with – and I found out they were the owners. I’d been going to Scarpa’s restaurant since I was a teenager. Back when Glenn’s father owned it, the name of the restaurant was Mario’s in Winter Haven.”

They kept in touch over the next few months and when an opportunity to tend the bar became available; Ashley and Glenn offered Todd the job.

Before moving to Boca Grande, Todd managed Gary’s Oyster Bar & Seafood House, a legendary restaurant in Polk County, Florida. He started out at the restaurant when he was 16 years old, eventually working every position from the front of the house to the kitchen and ultimately the bar. He managed the establishment for more than 20 years.

“I started out shucking oysters – a lot of oysters,” he said. “We would go through more than 150 boxes each week. I’ve probably shucked millions over the years.”

Todd said the restaurant has hosted parties for the Boston Red Sox in the 1980s, and also for the Kansas City Royals and Detroit Tigers.

“It’s a landmark there, it’s been around for a long time.”

Todd is originally from Winter Haven. His father was in construction and his mother worked in the nursing field.

After graduating high school, he attended Polk State College for a while, and then decided to pursue a full time career in the restaurant business.

He currently lives in Englewood with his wife, Christal, and daughter, Ryleigh, and their dog, Fisher Bones and cat, Tyson. Ryleigh is a junior at Lemon Bay High School.

“We knew we wanted to move to this area for years,” Todd said, adding that his sister, Denise, has lived here for nearly 20 years. And now his mom and mother-in-law have moved to the area as well.

Todd and Christal met and dated when they were in high school, and then parted ways for almost 10 years. She and his sister, Denise, are best friends. One summer when he was planning to visit his sister in Englewood, she suggested that since Christal was also planning to visit that weekend, they should carpool. They have been together since that fateful car ride … almost 20 years.

Todd said besides the influx of people, he doesn’t feel Boca Grande has changed that much since he first started vacationing here almost three decades ago. He said Lakeland has changed drastically.

“It was all orange groves when I was growing up, and now there are commercial restaurants and hotels everywhere. When LEGOLAND opened that brought even more businesses to the town.”

Shortly after Todd moved here, his mom moved to Englewood. Then six months later his mother-in-law decided to move to the area as well.

When he is not working or spending time with his family, Todd enjoys all kinds of fishing, golf, boating and relaxing at the beach. The restaurant was open during all of the tarpon tournaments this year, so he didn’t get a chance to participate in any of them because he was working, but he’s hoping to get on a team next year.

“I think we may try to put together a team here, or maybe someone will have an open spot on a boat.”

Stop in Scarpa’s Coastal and say hello to Todd and try a “Boca Sunset” with dinner. The restaurant is open Tuesday through Sunday from 5 p.m. to 9 p.m. and Friday and Saturday from 5 p.m. to 10 p.m. Extended hours are planned for the upcoming season.