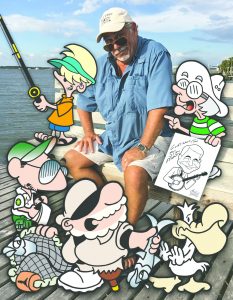 Life imitates art, but cartoonists draw what they see…

BY OLIVIA CAMERON-Page five always comes with a splash of color, talking sharks, a peg-leg captain, tourist shenanigans or all of the above. Life imitates art in Tim Banfell’s comic strips. Cartoonist Tim may be known for his classic comics in our own newspaper, but some might see a Jimmy Buffett lookalike.

As a Florida native born in Pensacola, Tim is no stranger to sand between his toes. He spent his youth as a beachcomber on his playground of Sanders Beach. He was one of a family of fishermen, as well.

“I loved my childhood,” he said.“My whole life was on the water. I would spend all day out on the beach swimming, sometimes when I wasn’t supposed to.”

Uncle Kenneth, a next-door neighbor in their small community, set the neighborhood curfew. Once he whistled for his kids to return home, the rest of their mates would run back.

From a record-setting sandbox to the freezer isles of the corner grocery story, Tim grew up surrounded by characters.

“My dad died when I was at the young age of 9, so this gentleman at the store became a father figure to me,” said Tim.

As Tim spent his days in the grocery store, he observed the characters passing down the isles.

“I always knew I wanted to do something like a comic strip, TV show or write a book, because I’d see a cast of characters come into this store. I kind of still draw off of that idea even when I do scenarios now. My comic strips are very old school, if you will, with gags and thoughts,” he said.

Tim recalled getting the artistic gene from his mother.

“My mom could draw, but she didn’t make a big deal out of it,”said Tim. “She drew my childhood hero, Popeye, on a piece of plywood and painted it, and my dad cut it out. I still have that to this day.”

The first character he ended up drawing was Popeye.

Tim’s artistic mindset would get him into trouble when he created comic strips for his friends during class. His classmates quickly became his inspiration for caricatures.

Despite proper artistic training and guidance, Tim looked long and hard to get his comic art syndicated. After disheartening rejection letters, he stuck himself in a marketing position.

“When I was in the tail end of marketing, it was parallel to ‘Mad Men.’ You sat in a room, came up with a concept, designed a campaign and executed it.”

On the path to fame, Tim moved to New Orleans to further his theatrical life as a singing and dancing jazz club waiter. Moonlighting as an artist, Tim’s first recognized caricature was Bob Hope, whom he later met and who graciously autographed his work. Tim also shared a caricature with Steve Martin, receiving a greeting and signature as well.

While in the city, he met his wife and teacher, Laurie. Their first date took place at a New Orleans lighthouse, and in reminiscent fashion, they married in front of a lighthouse in Pensacola. Together, Tim’s son and Laurie’s children made up one big family. Still, Tim was homesick.

“I felt like I was on ‘Gilligan’s Island,’ trying to get out of New Orleans and move back to Pensacola,” said Tim.

He turned to his artistic abilities in the hope that he would earn his fortune and could relocate to wherever he pleased. New Orleans girl Laurie had already packed her bags.

“My family lived in New Orleans all our lives, but I always wanted to get out,” she said. “When Tim mentioned Florida, I said, ‘let’s go.’”

Once she landed a teaching position at Episcopal Day School in Pensacola, the pair moved. They meshed their love of the beach with their dream lifestyle on the coast.

Singing in the right key led Tim to drawing in the wrong key. In 2001, the Boca Beacon newspaper picked up Tim’s comic strip, ‘Wrong Key,’ and the rest is history.

“My mother had no filter,” said Tim. His first comic strip came from a frothy discussion at breakfast with his family. His mother’s mockery of his brother, Skipper, ignited his branding the strips Wrong Key.

“The strip’s name is based on one of the many key islands we have in Florida, but if it’s not this key and it’s not that key, it’s the wrong key,” Tim laughed.

His comic strip characters were cast as doubles of his close family members and friends. Lead character Cap’n Bilge is a doppelganger of Tim’s brother, Skipper, and his firm disposition. The snappy character Nanny Coral, inspired by his mother, owns the comic strip’s bar and grill, ‘Coral’s Reef.’

The character Swab was based on his son, Tim. Jr. Nesta, a Jamaican tourist, earned his name in homage to Bob Marley, whom his son idolizes. Nesta is Marley’s middle name. The not-so-ladies’-man and island cop, E.C., imitates a cop and friend of Tim’s from Escambia County.

A pelican named Conch also frequents the strip with his frank opinions and voice of reason. Ironically, he lacks a taste for fish, and his inability to fly is the reason he is found beachside.

“These characters repeatedly appear and are supplemented by additional tourists,” said Tim.

Since debuting Wrong Key in the Boca Beacon, Tim has also been creating for newspapers including the Key West Citizen and Gulf Breeze News. 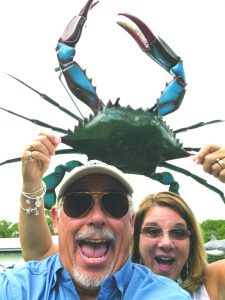 “The only vacation I ever took in my childhood was aboard my dad’s boat, the Flying Dutchman. Before everything was truly developed in Florida like it is now, we thought that out on the water we were a million miles away,” said Tim.

They’ve made up for lost traveling time by tracing the edge of the state with their Jeep.

However, when the two parrotheads visited a Jimmy Buffet concert in Orange Beach, Alabama, Tim fallaciously left a reporter starstruck for the wrong reason.

“When I wear a hat and aviators, I have a slight resemblance to Jimmy Buffet,” said Tim. “While we were at the concert, a Fox 10 reporter thought I was him and interviewed me. I prayed for him to stop any minute, but he kept asking me questions. A friend of ours even got in on it.”

When the truth came out, the reporter had to make it clear on air that he’d been swindled. A few weeks later, Tim bumped into the reporter at a coffee shop, and a year after the infamous hoax, Tim sent the reporter a caricature of the interview.

“He said that would always be his most memorable interview.”

Tim’s tourist renditions and seaside gags will continue to bring smiles to our weekly readers.