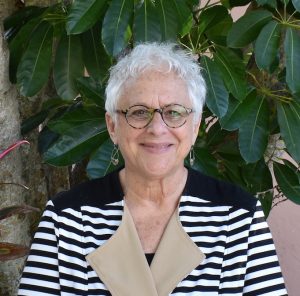 Terry Marks spent an exciting, busy day on the island in December setting up a recent “friend raiser” for the Suncoast Humane Society. “Rescue Me” was a musical show produced by Erica Ress Martin featuring nearly 30 familiar Boca Grande faces at the Crowninshield Community House. The event supported the Suncoast Humane Society Capital Campaign. “It was a huge success thanks to Erica and all of those involved,” Terry said. Terry is the Director of Capital Campaign for SHS, joining the organization last September. Prior to that, she spent 15 years working on Wall Street in New York and then started her own fundraising consulting business in California, working with a variety of organizations and missions.

Terry was born in New York and grew up in the Bronx. She said it was a remarkable experience to be brought up in New York City. “Everyone in our building knew each other and there was a very deep sense of community,” she said. “The huge enrichment from growing up there was that I was able to meet people from many different cultures and backgrounds.”

Spending much of her life in the city until college, she recalls she didn’t see a farm – or a cow – her entire childhood until she went to Ohio. Terry attended the University of Cincinnati in Ohio and majored in education. After graduating, she taught high school history and English for a while, until her mother recommended a position that was vacant at an insurance firm on Wall Street in New York City. “It was a time when there were too many teachers on the market, and I decided to move back to New York,” she said. “And that became a 15 year career for me.” When she was 30, she became vice president of an insurance brokerage and as her career grew, worked with Fortune 500 companies, designing insurance programs and assisting with risk management.

It was then that some friends, who were successful writers, wanted to start an environmental magazine for children, and they approached Terry and asked if she would consider becoming Publisher and help raise funds for the project. “At that point, I was ready for a change.”

Terry developed a formula to fund the magazine. The idea was to work with corporations and encourage them to purchase large amounts of the magazine and put them into local school systems. It was a way to educate the next generation about the importance of addressing environmental concerns. “Turner Broadcasting, Star-Kist, Patagonia were some of the larger sponsors,” she said. ”We worked with many other well-known corporations in addition to these lead supporters.”  The magazine featured articles about the conservation of water and recycling waste, nature and animals, and preservation of the planet. After that project winded down, Terry consulted for the National Resource Defense League. It was at that time she realized how much she enjoyed being mission driven and raising funds for non-profit organizations.

A year later, Terry decided to move to Los Angeles to seek new opportunities in California. “My risk adverse mom thought I was crazy, but I was excited,” she said. “I was more afraid of standing still and being stagnant … and if it didn’t work, I could always come back.” She said L.A. is a great place for people to go when they want to reinvent themselves. “There’s just a lot of opportunity.”

She started to build her reputation as a fundraising consultant, working with clients large and small. Her longest running client had a mission to help children with Autism and other developmental delays. Terry was hired to run a capital campaign, raising more than six million dollars to build a campus on the west side of L.A. for children with Autism, developmental and learning disabilities. She created a cause-related marketing program with “Coffee Bean and Tea Leaf,” an establishment similar to Starbucks, which has raised millions of dollars and the collaboration is still ong ing. She also helped develop and market a book called “Autism Heroes.” Although she was still living in California, she had multiple clients and often traveled around the country to serve her national accounts. Terry also was an instructor at the Center for Non-Profit Management in California for ten years. She taught strategic planning, capital campaigns, donor relations and marketing, which makes her a perfect match for her current position with the Suncoast Humane Society. After 17 years, she chose to move back to New York in 2009 when she learned her mother was facing some health issues. She accepted a position as Chief Philanthropic Officer and eventually interim CEO at the National Eating Disorder Association. “In that capacity, I successfully wrote a grant for $750,000 and oversaw 65 walks around the country.

In addition, I was able to secure the first corporate sponsor, Aerie/American Eagle that was not specifically related to serving those with an eating disorder. That was a breakthrough” she said. Terry was seeking warmer weather. She had only visited the east side of Florida in the past, and after doing some research, she took a road trip to visit Clearwater, and then drove up to Sarasota. “Coming from Manhattan where there is so much culture, this was really a good fit because it was very important to find an environment that offered museums and theater and other activities.”

That was about three years ago and she has no regrets. She said after all her years of experience, she never had the opportunity to work with an organization that serves a mission so close to her heart. “When I saw Suncoast Humane Society’s advertisement for the position – I just had to apply.” After meeting with Phil and taking a tour of the facility, she immediately realized and understood how much a new home was needed for Suncoast Humane Society. “Every inch of space right now is being utilized and the building itself no longer responds to the needs of the animals, the community and the staff. Speaking of staff, Terry said they are wonderful to work with, both positive in their attitude and professional in their interactions with the public. In addition, Phil is incredibly knowledgeable and supportive of her. Terry loves her job and the bonus is seeing animals find their forever homes. The new building itself is going to cost approximately eight million dollars. But then there are additional items, aside from building costs, such as furniture and fixtures, surgical supplies, technology, updated equipment and also development of outdoor spaces.

“For me it’s not just about saving all these animals and respecting those little souls … it’s also seeing the connection between the animals and the people who adopt or care for them.”

Terry has recently created a new brochure that informs people not only about the mission of SHS but also some of the things they can specifically donate to, so their names can be permanently a part of the new center. You can, for example, have the Clinic Lobby named after you when making a certain size donation, or specify that you want your contribution to go toward the  Surgery Suite or a “Catio” where cats can roam and explore the outdoor air while still kept safe by screens.

“We are fortunate to have such strong support from the Boca Grande community. We have raised more than 2.534 million right now and are confident that we will attain our goal. We also have committees formed in Englewood, Manasota Key and other areas, so that all the communities we serve have an opportunity to support a new home for Suncoast Humane Society.”

The pet care center will offer preventive care and there will be a large cat room to interact and visit with adoptable cats. And rather than a typical kennel area, there will be glass doors that people can view the dogs and the dogs can see out, all in order to create a less stressful environment.

“It’s going to be a very different experience for people coming into the new building,” Terry said. “The adoption experience will be more intimate because people will have privacy in making their decisions and time with their potential new pets.”

Terry knows how important it is to relate to animals, she has two very adored rescue dogs, Tyler and Chloe that she loves to pieces.