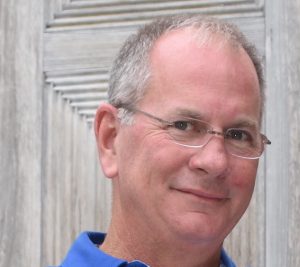 Steve Rinaldi remembers when there was a campground at the north end of Gasparilla Island. As a kid, he would visit Boca Grande with his family every few weeks. He also recalls when the Innlet Marina was the Knight Brothers’ boatyard.

“It was still operational when I was a kid, and they had an old pilot house from a vessel. We would go over and play with the parts that were stacked up over there – that was our playground.”

He said fishing was very good off the beach, and he and his friends would find a few shrimp and pull in a fair amount of snook on any given day.

“There were no golf carts, so we rode our bikes everywhere, and when we were about 11 or 12, we learned to drive cars around the island.”

He said there were mostly shell roads back then, and there really wasn’t that much development north of 17th Street.

When Steve was in college, he would spend Friday and Saturday nights at the Laff-A-Lott at the south end of the island, where South Beach Bar & Grille is now located. It was the place to be for young adults. Sometimes he’d stay out with friends until 2 a.m. and then go down to the guide docks and jump on a boat to go tarpon fishing.

Steve grew up in Tampa, where his great grandfather owned a publishing company called Rinaldi Printing & Packaging. The company has been in business since 1905, and Steve is currently the president. He manages about 45 employees at the printing company.

His grandfather would regularly bring his boat down to go tarpon fishing in Boca Grande. During the summer, he’d dock the boat at Miller’s Marina for the family to use.

His father would eventually bring clients down during the week to take them tarpon fishing, once he took over the company.

“The family would come down and stay at Journey’s Inn on the weekend for a few days to do some fishing,” Steve said. “We got pretty good at tarpon fishing; then when the jig laws changed, we started to do more back-country fishing. We caught a lot of snook.”

Both his mother and father were fishing enthusiasts and they’d go out on the water as much as possible.

His father was at Miller’s Marina the day it caught on fire, and he helped move the boats away from the docks.

Steve spent many days on the island while growing up. His grandparents owned another home on Manasota Key, where he also did a lot of fishing as a kid.

“It was great to have an island like this to come to for spring break and holidays,” he said.

When Boca Grande North was built in the 1980s, Steve’s parents were one of the original owners at the development. When they retired 12 years later, they purchased a home in Boca Bay.

“My dad passed away two years ago, and my mom sold the house and moved back to Tampa,” he said.

Steve and his wife, Kathleen, currently live in Tampa and own a home in Boca Grande North. They split their time between the two places and keep a boat on Damfiwill Street. They come to the island almost every weekend.

“It’s a nice break away from work,” Kathleen said, “It’s less than a two-hour drive, and every time we cross over that bridge it’s like utopia.”

Kathleen said Steve used to bring her to Boca Grande while they were dating, and the first time she visited the island she just fell in love with it.

“And I’ve loved it ever since,” she said.

Steve and Kathleen met through mutual friends in their respected fields. Kathleen was director of sales for a cruise line in the travel industry. She is still in the business, but has retired from the cruise line aspect.

“It was just too much travel for too long,” she said. “I covered the United States, Canada and Europe. So now I just book travel agendas for people.”

Kathleen said when the individual cruise lines were privately owned, the industry was much more intimate. Now that they have gone corporate, it’s a very different industry.

“It was a very close-knit community back then,” she said. “We would have meetings on the ships and bring our family – we had a lot of fun.”

Kathleen and Steve have been on more than 100 cruises over the years.

Both avid travelers, they’ve been on many vacations over the years. Recently, they returned from a trip to Oregon.

“It was one of the places in the United States that I had never been,” Kathleen said. “I thought it was just beautiful.”

They also enjoy taking trips to the wineries in California and throughout the west coast.

Steve said the Rinaldi Printing business is doing very well. Some of the major customers include Outback Steakhouse, MacDill Air Base and several insurance companies and universities throughout Florida.

When Steve’s family originally opened the business, they started out as publishers and had an office in New York. They published a tourism book called “Rinaldi’s Official Guide Book of Tampa and South Florida.” The book was published in 1920.

“If people were planning to build, buy or vacation down here, this was the book they wanted,” Steve said. “It was a popular annual guide until the depression, and then the land boom was over. The book did cover Boca Grande.”

He said much has changed in the printing industry over the past 100 years.

“We have tried very hard to stay modern. Most of the work is commercial now, and we work with larger corporations.”

Steve can work from almost anywhere, so he and Kathleen have been enjoying longer weekends on the island.

They are looking forward to doing more fishing in the future, since they weren’t able to as much last year due to the red tide bloom.

“I’ve been coming here all my life, and I’ve never seen anything like that … and I’ve seen some bad ones,” he said. “All the fishing guides I’ve talked to this year said it was an unbelievable tarpon season, especially the night fishing.”

Although they do a fair amount of fishing in the Tampa Bay area, they prefer fishing in Boca Grande.

“You can catch tarpon from the bridges there,” he said. “They are not as large as the ones in Boca Grande Pass, but catching a 40-pound tarpon on light tackle is a load of fun.”

Steve’s dad left personal journals about the fish he caught here over the years, documenting the time, date and size of the fish. It’s a nice family heirloom for future generations to cherish.

Steve and Kathleen also enjoy golfing and theater performances by the Royal Palm Players. As they begin to spend more time in Boca Grande, both are looking forward to meeting new people at community activities this upcoming season.