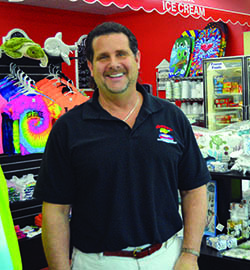 BY SUE ERWIN – Steve Kaplan was on a short three-day vacation in Boca Grande four years ago with his wife, Jill. They were visiting his brother, who had a condo in Boca Bay, and they noticed an advertisement on the Internet for a small grocery store that was available for purchase.

What was once Gil’s Grocery at the north end of the island was up for sale.

“We were sitting by the pool. I had just sold my business up north, and we both thought it would be a fantastic opportunity to semi-retire and live down here,” he said.

After inquiring about the prospect and visiting the store, they decided to make an offer to buy it.

“And I haven’t had a day off since,” he said with a laugh.

Once visitors cross the bridge onto the island, they’re welcomed to a quaint town store that offers everything from fresh deli sandwiches, drinks and ice cream to live bait, propane and golf cart rentals.

Sales had been going down when Steve first bought the place, and he had to put a lot of work into earning a good reputation as a new owner.

He decided to name the place Kappy’s Market, in respect of his last name. When he first reopened the store, they were selling five, maybe ten sandwiches per day. Now they sell between 50 and 100 daily.

Now, nearly four years later, he has grown the business from a small island market to a store packed with items that are convenient and often necessary to both regular visitors and vacation guests alike.

Browsing through the store, shoppers can find cold beverages, groceries and island attire, including sandals, as well as fishing bait and gear.

You can also grab a sandwich for lunch prepared just for you by Joe in the stand-alone deli. Joe bakes fresh rolls daily and serves only quality Boar’s Head meats.

Jewelry and other souvenir items are stocked near the checkout area at the front of the store.

And there’s a whole aisle filled with popular brands of over-the-counter medicines, should you encounter any unfortunate ailments during your vacation in paradise.

And don’t forget to grab an ice cream cone to enjoy while you travel around town in your bright red golf cart – Steve has 24 of them available to rent, 365 days a year.

“They’ve all been refurbished and they’re like-new. We painted them bright red and added our name to them so they could be easily seen,” he said.

The store is open from 8 a.m. to 8 p.m. every day of the year, including holidays. They offer meat trays and sandwich platters for people who might want to host a catered party. Just call the store and tell them what you want, and they’ll make it.

Steve has eight employees who help assist customers, including one native Chicagoan, Andy Charcut, whom he brought on board after purchasing the business.

“This year we’re focusing on getting more boutique items like T-shirts and gift items. Every season has different

customer demographics. During the summer, I mostly sell sandwiches and drinks. And then when the seasonal residents are here, we sell a lot of

T-shirts and jewelry. Then in May and June most customers buy bait, fishing shirts and wrapped sandwiches,” he said.

Steve grew up in the northern suburbs of Chicago and attended Northern Illinois University. After college he opened up a little hot dog and hamburger stand called Kappy’s Red Hots in Chicago. He ran that business for seven years.

“I had no experience, but I wanted to try the restaurant business. My dad owned the land, and we built the building ourselves and I ran it,” he said.

He sold the restaurant and ventured into another career move. He started a business called “Infotrack,” a company that did personal background checks and title abstract searches before the information was easily accessible via the Internet. The company served clients throughout Illinois, Wisconsin and Missouri.

“We would do criminal background checks, and we would go to the city assessor’s office and check for tax liens and encumbrances. It was the information business before the Internet was available,”

He started the business idea from scratch out of a bedroom in his home. In the beginning, his clients were mostly attorneys and private investigators. Over the years, the company grew to nearly 100 employees.

While running that business, Steve met Jill, who was a contract employee with the company.

He eventually sold the business after 24 years.

Steve and Jill live in Rotonda West and have been married for 19 years. They have five children between them and one grandchild.

“She just recently got her driver’s license, so it’s very exciting for her, but very scary for us,” Steve said.

Paige, 22, attends UCLA Law School and is studying to be an entertainment lawyer. Evan, 28, is in the electronic music business in Chicago. Jake, 33, owns a restaurant in Chicago. And Nikki, 29, also lives in Chicago and is the proud mother of Luca, 4.

The Kaplans also own a few dogs, include a Bernese mountain rescue dog named Cooper.

When Steve is not working, he enjoys watching and playing sports of all kinds. He was an avid coin collector when he was a kid, until unfortunately, the collection was stolen.

Next time you come across the bridge and head onto the island, stop by and say hello to Steve and Jill. Grab lunch or some cold ice cream and get your photo taken on the new

big blue Adirondack chair in front of the store.

Kappy’s Market is located at 5800 Gasparilla Road at the north end of the island.