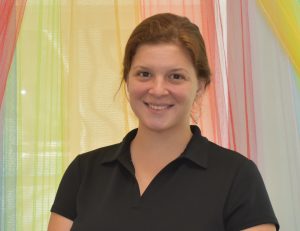 There’s a friendly new first grade teacher at The Island School this year, and her classroom is colorful and full with resources. Stephanie Shirback has replaced former TIS teacher Tammy Tieu.

Stephanie is no stranger to Boca Grande. She’s been visiting the island since she was a kid.

Originally from Massachusetts, she moved to Englewood with her mother when she was 7-years old. She attended Myakka River Elementary School, L.A. Ainger Middle School and graduated from Lemon Bay High School in 2008.

“My grandparents retired and were planning to move to Florida, so we came down with them,” Stephanie said. “So I actually feel like Englewood is my hometown.”

Her first job was at the Gulfview Grillin Englewoodwhere she worked as a hostess and eventually a server. She also worked at the Pink Elephant on the island for two years.

When she started college at the University of Central Florida in Orlando, she originally wanted to be a teacher. But she found the psychology and sociology courses so fascinating, she switched her major.

“My major concentration was a bachelor of science in psychology, but I also had a minor in behavioral forensics.”

She enjoyed the sociological aspect of the classes, but found the courses about crime were very disturbing.

“After I had my daughter I decided that was not the type of career I wanted to pursue,” Stephanie said. “Although it was very interesting to deconstruct a crime scene, I really enjoyed working with people and kids.”

Reflecting on her original plan, Stephanie decided to pursue a master’s degree in elementary education at USF in Sarasota. She completed two internships (for second and fourth grades) in Sarasota County, and her final internship where she took over the kindergarten classroom for the last half of the year was at Atwater Elementary in North Port.

Stephanie met her fiancé, Andrew, about 12 years ago through mutual friends. They were both students at Lemon Bay High School. They plan on getting married in November on Banyan Street in Boca Grande.

Stephanie and Andrew have two daughters: Ariana, 3; and Willow, 1.

She was seven months pregnant with Willow when she earned her master’s degree, so she decided to take a year off to be a stay-at-home mom. One year later she was ready get back to work. The family currently lives in Rotonda.

Andrew is the general manager at Visani Restaurant and Comedy Theater in Port Charlotte. Stephanie also worked at the theater over the past year.

“Having two little ones at home, I was just happy to get some adult interaction,” she said.

Fortunately both her mother and mother-in-law live in Englewood, so there are plenty of family members around to lend a hand when needed.

“I would not have been able to do this without the support of my family.”

When Stephanie was a teenager, she used to pet-sit for Jean Thompson, Head of The Island School. They lived on the same block in Englewood.

“I always knew about The Island School and thought it was a magical little place,” she said. “I always wondered how amazing it would be work in Boca Grande.”

During her application process to several schools in the area last year, Stephanie sent her resume and a cover letter to Jean, asking that she keep her in mind if she heard of any openings.

“I knew it was a long shot and I never imagined there would be an opening at the school.”

To her surprise, she received a phone call from Jean a few days later saying a teacher had just resigned. The next week, Jean invited Stephanie to come in for an interview.

“It was my third interview in one week and I was very nervous because I had just turned down a position at a different school,” she said.

After a tour of the school in Boca Grande and a two-hour conversation, she was offered the position later that day, which she happily accepted.

Stephanie teaches a class of 10 first grade students at the school. She said although the island charter school is packed with resources, there isn’t a media center or a computer lab on site, so she is taking her students to the Johann Fust Library on 10thStreet later this month.

“We were happy to be invited and I think the kids will enjoy it.”

Stephanie said The Island School teachers work together as a team and everyone is very supportive and helpful. The specials classes include music, physical education and STEAM (science, technology, engineering, art and math). Each student also learns Spanish.

Right now, the elementary education teacher is focused on English Language Arts and helping her students excel at reading and spelling. Stephanie uses a phonics program called “Fundations.” The program builds a foundation for reading and spelling for grades K through 3.

“It’s a new product and it’s meant to lay the groundwork for life-long literacy,” she said.

Toward the end of her graduate program, Stephanie visited The Island School to do some small group reading with second graders. She observed Ms. Blalock teach a Fundations lesson, and she was completely enthralled with the program.

“As second graders, they could decode words better than I could as a graduate student,” she said.

She’s also trying to get her students ahead in math. Right now they’re working on equals, and she uses scales in class as visual guides so the students can grasp what equals means.

There is also a strong focus on social studies this quarter and the theme is “Culture and World of Books” and understanding remote places. The students have been enjoying learning about Google Maps and seeing various places around the world that they’ve been reading about recently.

“Geodes” is another educational support product that goes along with Stephanie’s “Wit and Wisdom” ELA class. Small groups read themed books and rotate every 20 minutes and then participate in other activities.

“The first grade edition was recently released, so I’m the first one to get these books at the school.”

When asked how the school year is going so far this year, she said she is thrilled with the progress of her students.

“I found I have been really able to identify with each student and hone in and identify the needs of every single kid,” she said. “I want every single one of them to be successful in this class. My job is to keep them interested and make learning fun.”

Stephanie said she is ecstatic to be working at The Island School.

“I absolutely love it here,” she said. “There are many people willing to help me succeed as a first-year teacher. It’s a very supportive atmosphere.”

She is thankful that Tammy Tieu left behind many valuable resources in the classroom.

“I honestly haven’t even had the chance to look through everything yet … I am taking it in strides.”

When she is not working, Stephanie enjoys Harry Potter movies and going to the beach with her family.

“Boca Grande is the only beach we ever go to as a family,” she said. “My girls love the sand and the water. When you come across that bridge and see that gorgeous view … it doesn’t make sense to go anywhere else.”