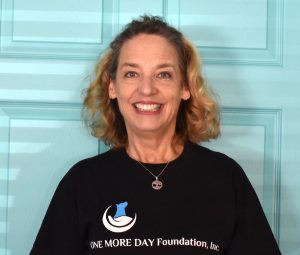 Rev. Sarah Whitten-Grigsby believes that even when a dog gets terminally ill, it doesn’t have to die alone and scared on a cold metal table.

That’s why she started One More Day Foundation, Inc. in 2016.

Sarah has spent her fair share of time in Boca Grande over the past few years. She used to volunteer at the Suncoast Humane Society and partnered with Jane Moyer at Island Dog Boutique & Supply, Co. on Railroad Avenue. Jane offered space in her store for Sarah to bring an adoptable pet each month to the store. A few lucky dogs received new homes because of the “Dog About Town” program.

“Jane is a great person, and she’s such a wonderful advocate for animals,” Sarah said. “I experienced some personal losses when I moved to Florida and the only way I knew how to heal myself was to volunteer at Suncoast Humane Society.”

She fell in love with dogs in her early 50s. Before that, she was a single woman with a demanding career and didn’t have the time to take care of a dog. She knew it wouldn’t be fair for it to be home alone most of the time.

Since her foundation is becoming so overloaded, she’s no longer able to volunteer at the Humane Society because she is so busy finding hospice guardians for the many dogs on her list.

“Dogs give us everything and if given a chance, they will stay with us until their last breath and too often, they aren’t allowed to do that,” Sarah said. “So I wanted to do something to give back to them; they heal us, so let us heal them.”

After doing some research, she discovered organizations who were offering this service in Seattle and San Francisco, and the organization were calling it “Fospice” (foster hospice for homeless dogs).

She learned there are two ends of the spectrum: One dog could have a slow growing cancer and have some time left, and then there could be a dog that just needs a beautiful last chapter. She had a vision there would be enough people in the area interested in doing this kind of work.

Sarah said it took about a year to get the foundation going, and now she’s being contacted by shelters from as far away as Miami and Tallahassee asking if she could find homes for dogs.

“It has unfolded in ways I never expected,” Sarah said. “When I post the fospice dogs on my Facebook page, the angels appear. It’s unbelievable. We don’t have a facility, so we have very low overhead. Our money goes directly to medical care for the dogs.”

The organization currently has just five volunteers, plus a volunteer transport service. Sarah works with five area rescue shelters that contact her after a dog is medically and behaviorally evaluated and needs a fospice home. She currently has fospice guardians in Englewood, Tampa, Tallahassee, Ocala and throughout Sarasota County.

“It’s incredibly rewarding because you are giving the best gift that you can give, love at the end of life … and we all want that.”

Sarah is from Westchester County, New York. She moved to Florida with her husband, Leslie, about seven years ago.

“We couldn’t take another winter or another fall on the ice, and Les has family in Nokomis so we moved to the area.”

They live in Englewood with their Suncoast Humane Society fospice cat, Pumpkin and their three dogs: Beasley, Lily and Basil.

Before moving to Florida, Sarah had quite an exciting career. While living in New York, she was involved in performing arts and taught comedy classes for kids.

“Theater really helps empower kids who are shy,” she said. “They really open up and gain confidence.”

For much of her career, she worked for Universal Studios Hollywood in California writing comedy. She was also a VIP tour guide. Then she was transferred to Orlando to help create the entertainment department for what is now Universal Studios Orlando.

“My corporate entertainment career was very interesting, but it was a very stressful job with many responsibilities.”

Because she was always being called upon during times of crisis by family and friends, Sarah studied at an interfaith seminary in New York City to get formally educated in ministering. She knew she wanted to specialize in animal therapy and do search and rescue chaplaincy, which is what she did for three years when she first moved to Florida. She served as a chaplain for Peace River K9 Search & Rescue in Englewood.

“My job was to be with family members of missing persons when they were at the search site and provide comfort for them.”

Last year, she took a refresher course at an interfaith seminary in Fort Lauderdale and will be ordained again at the end of this month. She has done several special requests for wedding ceremonies since moving to Florida.

When she’s not busy running the foundation, Sarah and Les enjoy bringing their dogs to the beach and swimming with them in the Gulf of Mexico. Les is a retired teacher and keeps busy these days with their fospice dog, Lili the Rat terrier, who took to him immediately the moment he entered the home.

“Lily is definitely his dog,” Sarah said. “She absolutely adores him.”

Sarah will be hosting a fundraiser in her home for the organization on Saturday, November 16. During the event, publisher Randy Moore of Englewood Healthy Living Magazine, will present One More Day Foundation with the Spirit of Englewood award. Raffle rickets will be on sale during the party (and throughout the holiday season) and a drawing will he held in early 2020. Wine and cheese will be provided. This event is private with limited attendance. Tickets are $25 and can only be purchased online at https://www.eventbrite.com/e/one-more-day-foundation-fundraising-party-tickets-74277362591

“Our guardians are a very special breed,” she said. “They are volunteers who are deeply compassionate, truly committed, selfless, and not afraid to experience the last breath of a dog or a cat.”

“Losing a member of any family – human or pet – can be very devastating,” she said. “We have to allow ourselves to grieve just like dealing with any other loss.”