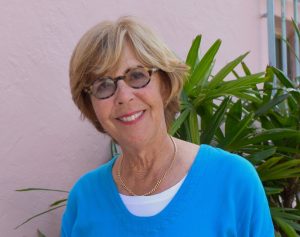 She knew at a very young age that she wanted to study acting, and with the encouragement of her mother, she headed down that path and never looked back.

“I’d always dreamed of being on stage and seeing my name in lights,” said Boca Grande seasonal resident Sally Johnson.

Originally from Westport, Connecticut, Sally attended the first two years of high school there and went away to the Colorado Rocky Mountain School for the next year.

“It was wonderful, because we would ski twice a day in the Aspen Mountains,” Sally said. “It was a very physical school, and I loved to ski, but I missed home, so I went back to finish school and I’m glad I did.”

After graduating, Sally went to college and tried to figure out what she wanted to do with her life.

A year later, her stepmother (who recently passed away) asked her what she had planned to do that summer. Sally didn’t have an answer.

“She suggested I become involved in The Neighborhood Playhouse,” Sally said. “This was a major school, five days a week and eight hours a day with the top teachers in New York at the time.”

The Neighborhood Playhouse was run by Sanford Meisner, the renowned American actor and acting teacher who developed an approach to acting instruction that is now known as the Meisner technique.

Sally was accepted for the six-week summer program. She remembers Meisner asking how many in the class had experience with acting, and he told anyone who raised their hands to forget everything they were taught previously.

“From the very first moment of class, I loved it,” she said. “I got it, I really understood what he was looking for at my level.”

After the summer class, the instructors dropped two-thirds of the students and invited the rest back for the next year. “You have to really prove yourself during those six weeks,” she said.

Of course, Sally was invited back.

Two years later, she moved to Los Angeles and studied with Lee Strasberg at the Strasberg Theatre & Film Institute.

“It was a very different approach to acting. We would do a lot of Yoga and breathing exercises, but it was all really essential in the learning process.”

She was auditioning at the time, with five years of acting instruction behind her.

“An actor has to be sensitive, and it’s very hard to take criticism when you’re sensitive.”

After a couple bad auditions, a friend referred her to Charles Conrad, a descendant of Sandy Meisner, who helped her prepare better for auditions. It was at that time that she realized she was actually more interested in teaching than acting.

Conrad hired her when she was 26, and she ended up taking over one of his classes a month later.

“Acting is almost like an exercise class. Once you get the technique down, you need someone to encourage you and take you to the next level. It was my job to direct students when they were overacting or underacting.”

She taught there for a year, but decided to follow a different passion at the time – a man she’d fallen for years earlier in New York.

“When I was 21, I was obsessed with motorcycles, and I went into a beautiful Honda dealership and met the owner of the shop, who was also beautiful,” Sally said. “Five years later, we got together and the rest is history … I’m still with him.”

She went back to California, and they had a long-distance relationship for a few years. When that became too difficult, she moved back to New York.

Her agent booked her for national commercials with IBM, Certs, Jif Peanut Butter, Dash and Ajax.

One 30-second commercial would take all day to shoot. Sally would continue to do commercials for the next several years, juggling teaching and auditions on both the East and West Coast.

When a teacher colleague of hers became ill she took over his class, and within a month she had two full classes.

She left that position to form her own corporation, the Sally Johnson Studio, Inc. in the Flatiron district of New York in 1987.

Sally focused on teaching students for film and television.

“Some directors like Woody Allen and Clint Eastwood didn’t want to give the scripts out ahead of time, because what they were looking for was truth and spontaneity,” Sally said. “I trained people to trust their instincts.”

She trained Julia Roberts for one month, very early on in her career.

“She epitomized everything that I was teaching. She had the energy, she had the spontaneity, she was edgy and funny and absolutely gorgeous.”

She also worked with Melissa McCarthy for years, before her career skyrocketed.

“I would give her a scene that had been done hundreds of times, and when she performed it, it was like something I’d never seen before,” Sally said. “She’d be crying her eyes out, and the audience would be laughing hysterically because she just had this way of making you laugh even when she was sobbing. She wisely went out to L.A., and I believe she got involved with a group I studied with called ‘The Groundlings’ – an improvisational company.”

Many of the actors and actresses who were (and are) on “Saturday Night Live” came from “The Groundlings,” including Jimmy Fallen, Conan O’Brien and Lisa Kudrow, to name a few.

Some of the people Sally trained who went on to star in successful Hollywood films include Dee Wallace Stone (“ET”), Carl Weathers (Apollo Creed in “Rocky”) and Veronica Hamel (“Hill Street Blues”).

“It was very exciting – I loved it,” she said. “It was hard work, but when I think about those days … I laughed, I wept, I was just amazed by the talent of the performers.”

She sold the studio in 2005 to two of her students.

Sally and Richard Aulenti have been together since the late 1970s. They discovered Boca Grande in an unplanned, interesting way. They rented a sailboat to celebrate Richard’s 50th birthday in late November and sailed from Punta Gorda to spend the night at Cayo Costa State Park. The next morning the weather had turned, and they needed to find a spot to ride out the storm. Richard found Boca Grande on the map, and they hooked up at Miller’s Marina, turned the heat on to warm up and then walked around and explored the island.

“We were amazed by the beauty and serenity of the island and decided we really wanted to live in the area eventually.”

A neighbor explained to Sally that the Royal Palm Players directors were having trouble getting people to audition for a particular show, and asked if she was willing to help.

“It’d been years since I’d done any acting, but I agreed,” she said.

The show was called “Snapshots” and was directed by Tad Ingram.

Since 2013, Sally has done one show each year with RPP. She doesn’t direct, but she teaches and offers a master class once a year. She also co-teaches The Island School kids’ theater program.

“We give the kids monologues, and they get so excited,” she said. “At the last performance, they had their lines memorized and showed up in full costume. We had no idea they’d be so enthusiastic. It was so infectious to see their confidence and love for acting.”

Sally said the people involved in RPP are so much fun, but they’re also very serious about the performances and they give it their all.

Sally and Richard enjoy boating and golfing. And Sally is a serious bridge player, as was her mother, Sally B, Johnson, who won five National Women’s Team titles, and in 1970 just missed a bronze medal in the World Women’s Pairs Championship in Stockholm, Sweden. Growing up, Sally swore she’d never play the game, but she started playing 12 years ago in Boca Grande and currently plays twice a week.

Sally encourages anyone who wishes to act, or be involved in any aspect of theater, to talk to someone at Royal Palm Players or visit the website (royalpalmplayers.com) to learn more.