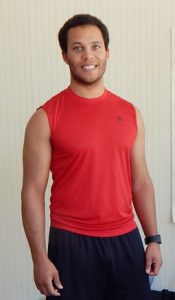 If you are looking to get in better shape or perhaps improve your golf game, you will want to meet this week’s profile candidate, Robert Topp. Robb, 26, is a certified personal trainer at Banyan Tree Pilates and Yoga on the island, owned by Chris and Heather McGill. He has been working there for almost two years. His focus is fitness and sports performance training.

After graduating from high school, Robb initially wanted to become a high school teacher. The first course he took was Introduction to Education.

“I remembered just glancing at the curriculum and seeing all of the responsibilities that came with that job. I began to think twice about what I wanted to do,” he said. After he finished that first class, he realized he really didn’t want to pursue that as a career. He went to Grande Rapids Community College for about a year-and-a-half, but he realized his calling was not in school at that time. He started to look at other options, and that’s when he decided to embark on his career as a personal trainer.

He took the International Sports Science Association Personal Training Certification Program while simultaneously working part-time at Kentucky Fried Chicken. “I was also managing my first ‘outside of the home household’ and living with five other people. It just naturally fell upon me to take care of most of the responsibilities in the home,” he said. Before relocating to Boca Grande, Robb worked at a fitness club in Martha’s Vineyard. That was a summer position, which led him to start searching for vacancies in warmer climates during the winter months.

Robb met his girlfriend, Maggie, while working in Chicago. “We were working at the same club and were hired within a few weeks of each other. I helped her with some things in the studio, and I took it upon myself to get to know her,” he said. Maggie is a pilates instructor and also works at Banyan Tree. She’s also a dance instructor. She teaches modern, ballet, jazz and hip-hop. She had an active part in Sesame Street Live. The couple have been together for about four years. Until this year, they were splitting their time between Boca Grande and the summer jobs in Martha’s Vineyard. When they found out they were expecting a son, they decided to make the move to live in Florida year round.

“The packing up and traveling twice a year would have been way too much to deal with after he was born. We also have a dog, so it’s hard to coordinate all those things,” Robb said. Their son Berric is now eight weeks old. Maggie is from Martha’s Vineyard and is the link between the summer positions up north for the past few years. Robb has always wanted to live in Florida. “I remember visiting Tampa Bay when I was six years old and I found a sand dollar. I immediately appreciated the fact that it was so much warmer compared to Chicago.”

His great-grandmother and great-grandfather visited Florida every winter, and sometimes they would bring Robb down with them. They eventually became snowbirds. Robb said that while Chicago was a great learning experience and an exciting city to live in and make connections, the fast-paced lifestyle eventually became too tiring. “And trudging through six inches of snow every day just to get to work was becoming less and less appealing. I always thought it was the coolest thing to be able to live somewhere where it doesn’t snow,” Robb said. He said the day he slipped and fell on some ice was the day he made up his mind that he would search for jobs in a warmer climate.

“I looked for work in Miami. My mom is half Mexican, so I have always identified with Latin culture. And of course I like the nightclubs there,” he said. But Maggie wasn’t really too keen on that idea. The couple talked back and forth about it for a while. Robb eventually discovered a vacancy for a personal trainer at The Gasparilla Inn & Club. Ironically enough, there was also an opening for a pilates instructor. “I sent an email stating that we could be considered a package deal, and I received a response right away. We had a phone interview a few days later, and we were both offered jobs.”

After the couple moved down to the area, Maggie contacted Chris and Heather McGill at Banyon Tree, inquiring if any help was needed. Heather and Chris welcomed them both to join their team two years ago. Right now, they are working opposite schedules so they can take turns caring for Berric. Robb works three days per week at Banyan Tree. Working the summer months on Martha’s Vineyard and the winters in Boca Grande, Robb said he noticed many things that were quite similar on the two islands. He said both places are very quaint and isolated. Everything is exclusive, which gives an authentic feel. But he prefers his position in Boca Grande and is happy to be living here year round now. “I actually really like humidity and the warmer weather. It motivates me.” He usually goes running every day around 11 a.m. Some of his clients from Martha’s Vineyard come down to Sarasota in the winter, and he is trying to get them to come to Boca Grande.

The fitness trainer is enjoying the island now that the season has slowed down. He said he enjoys getting the chance to meet more of the locals. “I feel like when you deal with local people, they are very down to earth. They’re not on vacation – they’re living a daily routine. And they care about the area.”

Golf is another sport Robb is deeply passionate about. He recently started a side business called “Golf Coast Fitness” in Port Charlotte. “One of my specialties is ‘Titlist Performance Institute,’ which is a simulator that evaluates 16 different golf swings and breaks them down and shows you what you need to work on to improve your swing,” Robb said. He plans to have an official grand opening in October.

He said he views golf as more of a meditative sport than a social sport. “I have always thought of golf as a beautiful mind game. As long as you can get out of your own way, you usually do pretty well. But the second you start worrying about how you’re playing, it usually goes downhill,” he said. He operates that business when he is not working in Boca Grande. For more information on that, you can send him an email at golfcoastfitness@gmail.com. Robb is currently trying to get involved with some local golf courses so he can coach in the junior programs. He also plans to help the golf team at Lemon Bay High School.

“As a personal trainer, I actually see myself as a teacher of sorts. I always like to give more … usually more than my clients may even want, but then I know they have more than they need.” Robb also has a background in Shotokan Karate. “I got to the point in middle school when I earned my brown belt, and they wouldn’t give out a black belt to anyone under 14, and I was 12, so I didn’t continue after that. Two years without progression seemed too long.” Although he no longer practices it, he still tries to incorporate certain things from the discipline into some of his personal training practice, especially if he’s working in an area that has a lot of open space.

Newer PostBoat trailer stolen, Fugates fugitive on the loose
Older PostMany thanks from Kids Classic coordinators: With 31 releases, they rocked the Pass!