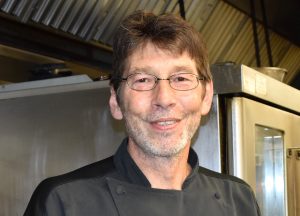 Chef Richard Gordon has been cooking up delectable dishes at Fusion for the past two years, and that’s a result of decades of experience dating back to when he was a teenager.

“My first job was as a dishwasher when I was 15,” he said. “And since then, I’ve done just about every job there is in the kitchen. I really enjoy cooking.”

Despite the fact that he didn’t have any formal training, he had the opportunity to work with some very talented chefs who were patient enough to show him the ropes. And he’s been kind enough to pass his talent along to younger, upcoming chefs who’ve been eager to learn about the profession.

“I’ve learned through the years that it’s much easier to teach someone if they’re truly interested in learning,” he said.

Born and raised in Plymouth, Massachusetts, Richard moved down to Florida more than 12 years ago.

“My mom lived here, and when she became ill I came down to help out,” Richard said. “I was a single guy at the time, and my siblings had established families, so I accepted the responsibility and moved to Sarasota.”

When he first moved down to the area, he actually wanted to get away from the restaurant business and take on a new career path, but he soon realized that you have to go with what you know.

“The economy was pretty tough at that time,” he said. “And it was a few years after the Deep Horizon oil spill, so people were afraid to eat seafood.”

He found a position at Coral Creek in Placida. That job didn’t work out, so he accepted a position at Palmetto Grille, which is now the Placida Grille.

When that business closed, he networked with some fellow coworkers and found a position at The Gulf View Grille in Englewood, where he worked for eight years.

“The Elmores were a very great family to work for. When I settle into a job I am dedicated, and I’ll give it what it takes to be successful.”

When the Elmores, sold the restaurant and the new owners took over, they ran the establishment quite differently, and several of the staff members decided to leave. Although Richard experienced no confrontation with them, he didn’t like the way the business was going, so he decided to move on.

He learned about the position at Fusion from the former chef at the restaurant, Tim Spain.

“Tim is a great guy. In this field of work there is a very tight network of people, and we all try to help each other out,” Richard said. “I have done and still do catering with him. We get along really well.”

At Fusion, the chefs combine elements of different cultures to offer a flavorful dining experience. The menu includes Thai, Indian, Japanese and French traditional meals. In addition to serving individual ethnic dishes, the chefs use elements of those dishes to create unique appetizers, entrees and desserts. Fusion opened in February of 2017. The proprietors also own the Boca Grande Resort. Guests staying at the resort have the convenience of walking next door to enjoy a relaxing dinner with a waterfront view. Sanjay Patel, operating manager and one of the owners of Fusion, said his associates purchased the property that was formerly Patrick’s Thai Bistro with the intention of making a few cosmetic changes to the décor and to offer a similar menu. Patel formerly owned an Indian catering company in St. Louis, Mo. for many years. He has been in the restaurant business most of his life and said he likes the concept of Fusion, because it incorporates different types of herbs and spices in a variety of ethnic foods.

Richard said most of the restaurant patrons are interested in the Thai items on the menu and sushi, but he’s been trying to incorporate more French-American options on the menu.

Osso Buco (veal shanks) is one item he has recently added to the menu, as well as teriyaki glazed salmon with asparagus and garlic mashed potatoes.

“I try to offer something for everyone’s taste,” he said. “I don’t like chain restaurants. I want to have the freedom to be creative and change things with the seasons. And there’s a much better appreciation level when you work for a family or a smaller establishment.”

Two other chefs also work at the restaurant, and all three work in the kitchen together every day.

“It’s a very smooth-running operation, and we all respect each other’s work,” he said.

Before relocating to Florida, Richard worked at The Sheraton Hotel and

Resort in Plymouth, Massachusetts, but he didn’t enjoy the corporate-style environment and decided to search for work at smaller establishments.

“The best thing about that job was I worked the breakfast shift,” he said. “I was done by 2 p.m. every day, and it was perfect for me because I’m a morning person.”

Richard has a daughter, Alexa, who is 27 and lives in Massachusetts. She works for iHeartRadio.

He has two half-brothers, Matthew and Zac, who also live up north.

When he is not working, Richard enjoys spending time outdoors and taking day trips to explore the state.

“I don’t take the beauty of Florida for granted one single day – it’s a wonderland out there,” he said. “Whether

I am at a state park or my own backyard, I really do enjoy living here.”

Fishing is Richard’s main hobby. He enjoys bass fishing in freshwater ponds and likes going out on the Myakka River. He has yet to fish the Gulf of Mexico, but he is looking forward to having the opportunity and possibly going tarpon fishing one day in the future.

Richard’s girlfriend, Brenda, also works on the island at the Boca Grande Club. They met when they worked together at Gulf View Grill.

Fusion Restaurant is open for dinner from 5 p.m. to 9 p.m. The establishment is located at 5800 Gasparilla Rd. at the north end of the island. The next time you’re craving some Asian cuisine and a variety of other delicious menu options, stop in and say hello to Chef Richard. Check out the Facebook page for current menu items and specials.